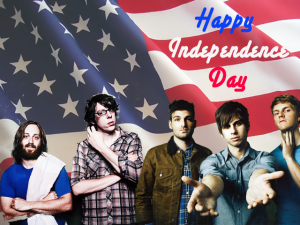 Whether our parents forced them on us or we discovered them on our own, we’ve all listened to American classics like Elvis, Michael Jackson and Bob Dylan. But what about today’s American greats? Who are the young talents coming up in the ranks to fill our jukeboxes and steal our hearts?

Despite an alarming number of Canadian musicians, we’re graced with an ever-growing list of talented American artists. Below are the top five picks from the B-Sides’ team this 4th of July.

1. Bon Iver – Even though America’s youth so densely referred to the Grammy-winning group as “Bonny Bear,” this American folk band has already left its mark as one of the most humble and talented groups we’ve ever had the pleasure of enjoying. Justin Vernon escaped to a cabin in Wisconsin to write most of For Emma, Forever Ago and his lyrics and vocals drum up feelings of campfires, sleepy summer nights and old friends.

3. Kanye West – Controversial and ambitious? Kanye sounds pretty American to me and along with his place as one of the top musicians and producers right now, TIME even thought he was one of the most influential people in the world.

4. The Strokes – With names like Julian Casablancas, Fab Moretti and Nikolai Fraiture, these New Yorkers have sexy pop-punk, indie-rock down to a science. Every time I listen to Is This It, I feel like I should be back in high school, riding in my boyfriend’s truck. The perfect soundtrack for quintessential American dates.

5. Foster the People – They’re hip and they’re cool and boy, are they good looking. While most high school girls were oblivious to the meaning behind the lyrics they were singing along to when “Pumped up Kicks” came on the radio, Foster the People blew up last summer and left no prisoners when it came to Top 40 charts.

Foster The People- Pumped Up Kicks

I hope some of these groups eventually inspire dance moves as spectacular as MJ’s, but even if they don’t (it’s almost impossible to dance to Bon Iver, and trust me, I’ve tried), I think they’ve left an impression.

Have a happy 4th and make sure your party play list pays tributes to some good ol’ American favorites! Who’s bringing the banjo?