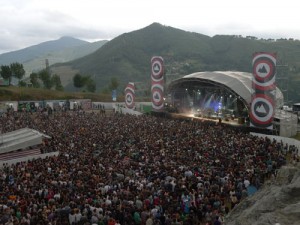 Bilbao BBK Live is a festival in the northeast corner of Spain, closer to the French-Spanish border than Madrid or Barcelona. With a lineup that rivals many four to six day festivals in Europe, Bilbao BBK Live is not only concentrated quality, but one of the most affordable festivals on the European summer festival circuit.

Much pre-festival excitement was focused on bands like Snow Patrol, The Maccabees, Band of Skulls, and AWOLNATION. Although those bands all produced solid sets, in the end, were not as memorable as the groups that will be reviewed in detail shortly.

Ben Howard was a notable artist with high expectations since he gave an impressive short set at the Sasquatch Festival some seven weeks prior. His music, while mellow, translates well to the stage as his songs are moving, emotion-provoking, and, most importantly, easy to sing along to. ‘Old Pine’ and ‘The Wolves’ stood out as hits everyone should check out. Ben Howard fans are passionate and the singer seems like someone that deserves all praise that goes his way.

The Cure played an epic set, in both length and grandeur. Technical difficulties led to a delay of over a half hour, but Robert Smith rewarded the crowd with three acoustic songs to start off, including ‘Boys Don´t Cry’. Nearly three hours of music at a festival by one band might seem like overkill, especially when the festival organizers had no alternate bands playing during the Cure´s set, but Robert Smith and the boys proved time and time again why they have been on the scene for three decades. If any song didn´t suit your fancy, the next always seemed to hit that soft spot we´ve all had for The Cure at some point. ‘From The Edge of the Deep Green Sea’, ‘Want’, and ‘In-Between Days’ have aged well and enthralled the crowd of close to 100 thousand.

Bloc Party have always struck this reviewer as a band content to do their thing in Europe, thereby making it hard to see them more often in the States. The band knows their strengths and planned a set ranging across their albums with the debut album´s tracks as a foundation for a band that has obviously evolved into a dance and beat-driven outfit from their early indie rock roots. ‘This Modern Love’ and ‘Flux’ highlighted a near flawless set from the Brits.

Here We Go Magic have to go down as the surprise band of the festival. While their crowd was sparse due to bigger names playing at the same time, the band belted out tunes that can best described as a little bit Beach Boys, a tad Radiohead, and a lot of Talking Heads. The interplay of all four members singing along with an experimental sound rooted in pop basics created a divine sound that their crowd loved.

Sum 41 brought the pop punk to the festival to the delight of the many Spanish youth in attendance. Their late start time on the last evening had left the remaining audience excited, exhausted, and jubilant all at once. Pop punk might not be on the radio as much these days, but when a band has a sound and image down, they are smart to keep it going for as long as they can. The Canadians had the right balance of antagonizing the crowd (very punk) to embracing the youthful exuberance (very pop) and played all their hits following a stretch of polar opposite bands in Garbage and Keane. Perhaps that is what makes this and most other summer festivals so great. Different genres, and in Bilbao BBK Live´s case, bands that sing in different languages can play back to back and nothing is lost. The crowd loves the variety and embraces it all.

Radiohead closed out the second night, and for many attendees, the festival. Saturday, or day three, was notably less busy crowd-wise, but understandably so when looking at the headliners and their current relevance. The gentlemen from Oxford continue to move audiences with a great live show that uses cameras on each band member and interplays their songs’ waves of emotion with corresponding colored lights. Even among one hundred thousand people, a concertgoer for a Radiohead can feel the intimacy of their hits because their sound does not allow for instruments to get drowned out in a wall of sound. Radiohead gives a visual treat along with the impact of their songs’ ground-breaking and image-invoking style.

Bilbao BBK Live 2012 exceeded expectations of European-style fun, enthusiasm for English music from both sides of the pond, and, by chance, great Spanish summer weather with no extreme heat or rain out to speak of. Bilbao should be a destination for American summer festival goers for years to come!