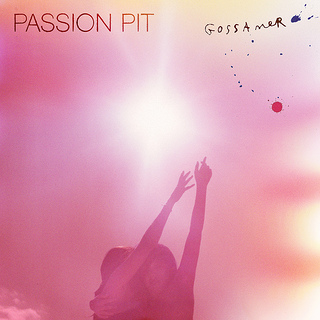 Cambridge boys and electro-pop group Passion Pit released their second full-length studio album, Gossamer, on July 24, 2012. After 2010’s Manners, I was jonesing for some new Passion Pit and the album brought me the electronic waves and falsetto glory I was craving.

In true Passion Pit fashion, it rocks with synthesizers and dance beats, but there’s more behind the troubled lyrics this time around. The sound envelops you into its tumultuous world with shiny string instrumentals, peppy drums and clear melodies, showing that Passion Pit is king when it comes to our generation’s 80s-inspired obsession.

Released back in May, “Take a Walk,” is my favorite track on the album, not for its recession-era theme, but for its pavement pounding release of pent up energy and emotion. With this track, unlike the following tracks, it’s hard to place the lyrics with what’s going on in Michael Angelakos’ personal life. He’s only 25, and while he’s experienced a lot, it seems far away from his current state of mind.

The second track on the album, “I’ll be Alright,” gives fans the clanging beats they’ve come to expect, allowing them to jump along to the experiences that Angelakos throws out for the world to share.

“Constant Conversations” feels forced as the group attempts an R&B persona they can’t quite reach. After a few listens it’s less awkward and easier to step into the story, but it belongs on an album you’d pull out along with the candles and good wine. The lyrics are comforting in a way and it’s hard not to picture yourself along with, “Well you’re wrapped up in a blanket / And you’re staring at the floor / The conversation’s moderated / By the noisy street below.”

Nearing the end of the soul searching, almost severe journey, “It’s Not My Fault I’m Happy” is a beautiful, touching song that we’ve never completely heard from Passion Pit before. It takes you up and over the hill and leads into the unsettling finale, “Where We Belong.”

B-Sides is pumped to hear their new tracks live over the next few months. Check out their full tour schedule here. Let’s hope everything works out for Angelakos personally and that despite the July hiccup, the rest of the tour runs smoothly.

Passion Pit ~ It's Not My Fault, I'm Happy (Gossamer)