The second day of Lollapalooza was suspended for a few hours of the festival due to severe weather conditions. Inclement weather hadn’t been a problem during festivals during previous years(last year Foo Fighters played in the midst of a short rainstorm), as the rain was not as heavy but strong thunderstorms with gusting winds approached the Chicagoland area just as the festival had kicked off. Taking the necessary measures to protect festival goers and the performers, the festival grounds were quickly evacuated just as the festival had started to get going. Unfortunately, the suspension meant that the bands scheduled for the late afternoon, were rescheduled to perform at the same time as even more artists. Bands such as, Bloc Party, were scheduled at the same time as Calvin Harris and Twin Shadow, while Washed Out was up against Franz Ferdinand, The Weeknd and the beginning of the Calvin Harris’ set. 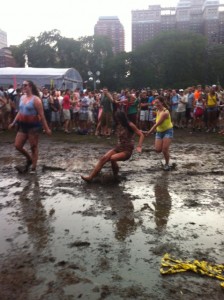 Regardless, the crowd seemed to take the schedule changes in stride as many of the attendees were seen bouncing around between sets more than usual. tUnE-yArDs and fun provided a good balance of levity and solid sets that included a huge sing-a-long for the latter’s huge hit, “We Are Young”. Winning the award for best name for band to represent the weather-shortened day, chillwave band, Washed Out played a mesmerizing set that got people to forget all about the bad weather. The Georgia native, aka Ernest Greene, captivated the crowd with tracks from his latest album, Within and Without, that included “Amor Fati” but “Portlandia” fans, which was the majority, went crazy for “Feel It All Around”, the show’s theme song. 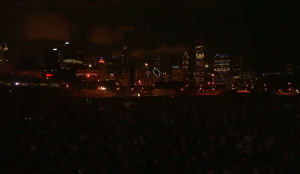 Although the storm knocked out some of the rear-stage light panels and Jumbotron, Scottish band Franz Ferdinand played in front of a packed crowd that took in the set the old fashioned way- craned necks and head-nodding. The band put on a raucous set regardless of the missing of electronic visuals as they got the huge crowd jumping and dancing to “Michael”, “The Dark of The Matinee” and their signature tune, “Take Me Out”.

The band who would win the award for “Band both Mom and Son Can Enjoy” goes to Twin Shadow, the Brooklyn-based artist whose real name is George Lewis Jr. Starting the set 15 minutes late because of last-minute adjustments to the stage visuals, the crowd got going with the 80s-influenced dark new-wave sound, through a short set that was highlighted by “Five Seconds”, from Twin Shadow’s latest album, Confess. 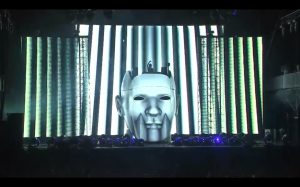 The crowd ready to just rave for the remainder of the night were more than ready for Calvin Harris and Avicii, who were scheduled back-to-back on separate stages. Without a doubt, both artists were armed with huge EDM anthems as an over-flowing crowd danced along to Calvin Harris as he played this year’s smash, “Feel So Close” and “Save the World Tonight” as strobes flashed and smoke filled the air. As the dance party was going and the Red Hot Chili Peppers were on the main stage, Frank Ocean crooned during a soulful set to respectable crowd. Starting the set with an acoustic cover of “By Your Side”, originally done by Sade, the casual crowd was won over immediately. The crowd was firmly into his set as he sang “Thinking Bout You” and singing loudly along to “Bad Religion”. If not for the rain delay, Ocean’s set may have had one of the larger crowds but it only enhanced the experience for those in attendance. 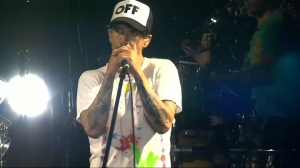 Playing the main stage, Red Hot Chili Peppers returned to the U.S. after a lengthy international jaunt. Performing a healthy mix of Chili Peppers classics with tracks from their latest album, I’m With You, the alt-rock veterans put on an energetic set that saw lead singer, Anthony Kiedis and bassist, Flea, rocking a set of pants with one of the pant legs cut knee-high. Regardless of their status of alternative radio staples, the diverse audience ranging from “Generation X” to the “millenials” soaked in the hit-laden set that opened with “Monarchy of Roses”, their radio hit from earlier this year. The onslaught of hits started with “Around The World” and continued on through “Snow”, “Otherside”, “Can’t Stop”, “Suck My Kiss” and “Under The Bridge”. Josh Klinghoffer proved to be a more than suitable replacement for original Chili Pepper guitarist, John Frusciante, who left before the band started working on the latest album. Klinghoffer, is no stranger to the band as he previously toured with during the band’s final dates of their Stadium Arcadium tour and strummed along on guitar face-to-face with bassist Flea during various times of the set, jamming in unison. The Red Hot Chili Peppers were exactly what the weary crowd needed after a tumultuous day as their set ended as fireworks lit up the sky over Lake Michigan.

The weather delay only added to making the second day of Lollapalooza a memorable experience for the thousands of music fans.