Sunshine and great music is what people hope for when attending Lollapalooza and the final day of the 2012 edition is what they got. After torrential rains and winds caused the legendary festival to be suspended and forced an evacuation, many all around felt like they wore a badge of honor for making it to Sunday’s event in one piece.

Early performers, Mona and Oberhofer set the tone for the day as they came out of the gates ready to rock. Both bands have garnered minor airplay on U.S. radio as Mona put on a tight set that got the crowd going with “Listen To Your Love” and “Teenager”. Oberhofer, meanwhile, put on a rowdy set of power-pop sing-along tracks from their debut album, Time Capsuls II. Many in the crowd channeled the five-man Brooklyn band’s energy, especially from lead singer, Brad Oberhofer ran into the crowd simultaneously strumming and acted as if the 3-hour suspension from the day before was more like 3 weeks. The crowd danced along, hand-clapped and violently fist-pumped with enthusiasm when the band played “Gotta Go” and “Away Frm U”.

White Rabbits, who recently released their latest full-length, Milk Famous, was just as enthusiastic. Utilizing two-drummers, a la Modest Mouse, head-nods and fist-pumps welcomed the band by a large sun-drenched crowd that even included an attendee with a horse’s head mask on. With a comfortable stage-presence, the Brooklyn-based band performed tracks such as, “Temporary,” “Heavy Metal” and “Percussion Gun”. The most memorable moment of the set and perhaps the day was when lead singer, Stephen Patterson yelled out, “Michael Phelps” before the band launched into their last song.

The scheduling of Sigur Ros during the middle of the last day of the festival provided a welcome respite for some. Supporting their latest full-length, Valtari, the Icelandic band provided a soothing atmospheric soundscape for the warm Midwest summer’s day with tracks that included, “Varuo”, “Ekki Mukk” and “Dauoalogn”. By the end of their set, the crowd that had spent an hour trying to sing in Icelandic and lead singer Jonsi’s “hopelandic” dialect, walked away spiritually enlightened. 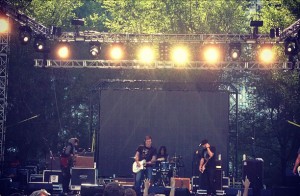 As the day wore on, the mood picked back up in a hurry, led by The Gaslight Anthem and At the Drive-In. Both bands played tight sets that got the same attendees, who were at Sigur Ros back on their feet and getting their second wind. The Gaslight Anthem has been growing with each album and jammed their Springsteen-esque sounds into the ears and hearts of the crowd. Kicking off the set with “Great Expectations”, the New Jersey band was tight and tracks like, “45,” “Casanova, Baby!” “Here Comes My Man” and “Old White Lincoln” brought the punk rock vibe, crowd-surfing and all, to the festival whose last day comprised of more indie-pop fare. Recently reunited, At the Drive-in put on a set that was fitting for numerous mud-laden mosh pits. Tracks like, “Cattacombs,” “Subdued” and “One-Armed Scissor,” worked the crowd into a frenzy like no other.

Florence & The Machine played to a crowd that appeared to be overflowing and massive. Florence Welch, who’s been recovering from throat issues, sang confidently and with apparent ease through a solid set that was overflowing with a crowd of all ages. Showing no signs of strain, Welch commandeered a set like a gospel-like choir as well as nearly hypnotizing the crowd to doing as she said, demonstrated overwhelmingly when she asked the attendees to become “human sacrifices,” i.e. to raise up a person on their shoulders and suddenly the crowd appeared like a pile of sweaty enthusiastic music fans. The large crowd sang along loudly but not enough to drown out Welch on tracks such as, “What The Water Gave Me,” “Dog Days Are Over,” and “Only If For A Night”.

The night got better as the sun started setting over Chicago, as Miike Snow, Chairlift, who was displaced from Saturday’s suspension and The Big Pink took the stage. Even though it was late in the last day of the festival, the huge crowds had no problem dancing along to the infectious sounds of Miike Snow and the band was right there with them, as they were quite active on stage. The predominantly Swedish band(2 out of 3) spared no expense as they put on a lively set that included strobe lights and fog machines to set the right visuals for tracks, “Paddling Out,” “Burial,” “Black and Blue” and of course, “Animal”. Charilift might perceive the rescheduling from Saturday to Sunday and at the same time as Miike Snow as a misfortune, but it provided the intimate crowd, who attended, a more memorable experience. The band was truly impressive as they performed their signature dreamy melodies perfectly that included, “Sacrifice,” “Wrong Opinion,” and “Sidewalk Safari”.

The night ended with an EDM duel between Kaskade and Justice each on their own stages while rocker, Jack White, performed on the main stage. Glowsticks were waving in full-force for both Kaskade and Justice as both brought in huge crowds, who came ready dance until the passed out. Although it appeared there were more people to see Kaskade, it was barely discernible as an equally large crowd sporting crosses everywhere from shirts to face-paint stomped and danced on the mud-laden ground for Justice. Keeping the rock alive, Jack White put on a tight set that was accompanied by alternating backing all-female and all-male musicians. Hours before taking the stage at Lollapalooza, White had just played an intimate set at Reckless Records in the Wicker Park district of Chicago, as part of his label, Third Man’s Rolling Record Store. Performing material that spanned his obvious White Stripes days to his current solo work, tracks like “Sixteen Saltines,” “Steady As She Goes,” “Hardest Button to Button” and “Seven Nation Army” were tight and retained the emotion of their original performers. White ended the set by addressing the crowd, “Now be careful and go home and hug your mother and father!” while also thanking deaf section of audience in sign language. With that memorable signature sign-off, Lollapalooza 2012, had successfully overcome the unpredictable challenges of Mother Nature and sent off the thousands of music fans into the night with stories for a lifetime.