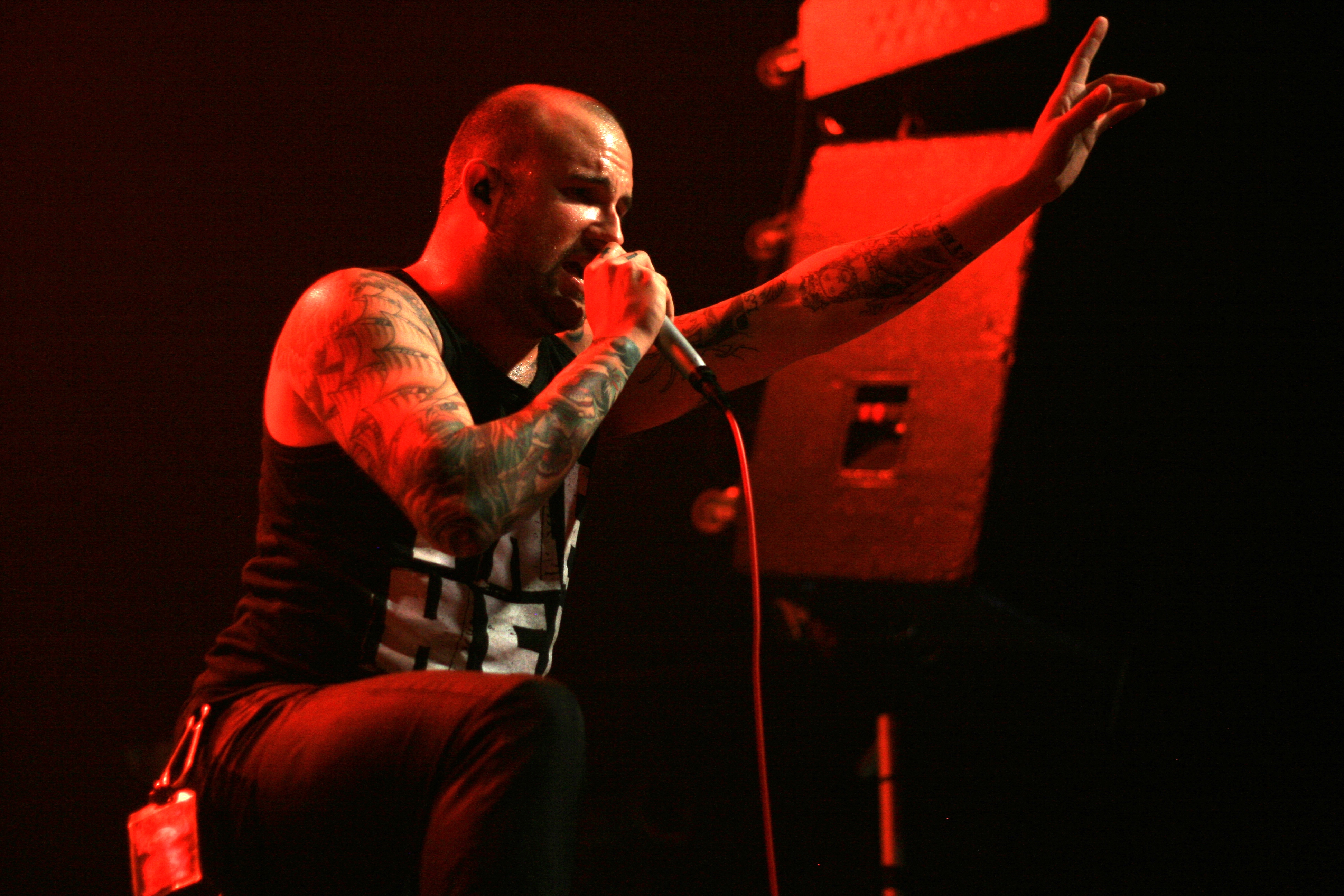 Tori Olson 09/18/2012
Nearly unparalleled in their technical ability, hardcore titans August Burns Red put skill to passion with their album Leveler. The band has been touring non-stop since the release of their album in June of 2011 and right now ABR is on a headlining tour with Of Mice & Men, The Color Morale and The Overseer. We caught up with drummer Matt Greiner before their sold-out show in Denver to talk Leveler, Acoustic songs and Christmas.

With Leveler, you guys tried to get away from the traditional metalcore/hardcore sounds and tried some new things  – what were some of the biggest influences, as far as sound, when writing this album?

Well when we started the band we had in mind that we wanted to write music that was heavy and technical and that only goes as far as your musicianship really. In other words, now that we’ve written four full-lengths, Leveler being the fourth, we were able to do more, you know playing our instruments longer. I think we started out with the same mindset that we did in the beginning but we progressed a lot more with our technicality, our melody and our experimental ambition. On Leveler, I think we found a sound that we are really comfortable, in regards to that it’s not just breakdowns and full-throttle 100% of the time. There are slower parts – if you were to be listening to the show, it would be “heavy, heavy, heavy, heavy” and then all of a sudden there would be this slower part out of nowhere. THAT song is probably on Leveler. And I like that a lot.

Being 26, I’ve been playing metal for about 9 years and you get bored. You find that the genre tends to be a lot more monotonous that it used to, that being said, there are still attributes to it that you really like but in general, there has to be that dynamic, that diversity. I think it just naturally played itself out on the record. We’ve never been one to write a record to be where we are like “Okay, this is what this song is going to sound like.” And “This is how it’s going to be.” I don’t think we are smart enough to do that. (laughs) I think we just kind of write songs as they come to the surface and if they are good then they make the record and if not, no one gets to hear them.

As far as content on the record, I know you guys draw a lot from personal experience and Leveler has some very profound stories and concepts but what is the one thing that you think is important for people to take away with from the music?

The concept is something that I thought of while I was reading Isaiah, I think it was Isaiah:26, while on tour. The passage talks about God being “The Leveler”, making level the road for the righteous. It talks about taking the corruption and what appears to be pointless evil, turning it over and leveling it out. In other words He has the final say, that God will show redemption and will take what has been used to harm people and will make it a great thing.

The original working title was Leveler, Make Level the Road for the Righteous and “Leveler” is another name for God actually. It does have a Biblical principal behind it but as we released the record and the artwork for it came out, it lended itself to being a metal record. It’s a heavy title. I mean it could be an Acacia Strain album title. But with August Burns Red, we’ve always found ideas and themes that seem to work with the genre, but that also have a lot more substance than meets the eye. That’s the case for Leveler. In the same way that some things can be as simple or complex as you want them to be, this is the title Leveler – you see the disheveled house, it’s been blown over by a natural disaster or whatever or you can be profound and deep and go back to God being the Leveler, as a redemptive God who takes what was meant for evil and makes it great.

There was an acoustic instrumental of “Internal Cannon” included on Leveler – will we be hearing any more acoustic work from August Burns Red?

That’s a good question. I think that is best answered by JB (Brubaker, Lead guitarist) and Dustin (Davidson, bass), who recorded it. I know they have fun recording those types of songs, but I also know they are very difficult because when you are playing acoustic you can’t just play one note at a time or one part at a time. You have to record the song in pretty big pieces and that’s tricky because you have to play really well. You can hear all the notes so well on an acoustic guitar. I think the idea of doing another acoustic track is very appealing to us for future records. I’d like to say we will do it again on the next one.

Leveler is August Burns Red fourth studio album – do you guys have a hard time narrowing down a setlist?

Yes! We don’t want to play songs that we’ve played a million times but we have to because we aren’t playing for ourselves. We are playing for our fans. There are always going to be those songs, especially over the course of a 4-album discography that we want to play but we just won’t be able to to. So, we just have to pick and choose the ones that are popular and the ones that people want to hear, but also what songs that are going to make us happy playing them.

We are pretty aware of what songs we play a lot of in certain markets. We’ve played Denver at least a dozen times in our career (maybe more) and I’m sure that there is one or two songs that we’ve played every time we come here. We are aware of that and we know that a lot of our fans that come out to see us have heard these songs a million times. The good thing about a headlining tour is that we can play 15 songs, so we have a lot bigger range and more options. 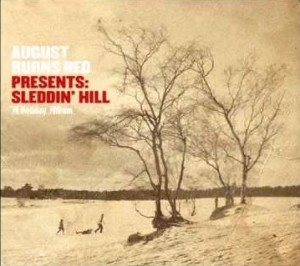 You are getting ready to release a Christmas album, featuring re-mastered versions of songs you’ve previously released. A Christmas album is kind of a different thing for a hardcore/metal band to do, what’s the story behind this?

We’ve been covering Christmas songs for a couple years. The first one was “Carol of the Bells”, which was included on Messengers. We did it for fun but we had been playing the song in Lancaster at a Christmas show we always do. It’s the highlight of the year for us because we can play in our hometown in Pennsylvania for our friends and family. When we did “Carol of the Bells”, it was the one song my parents and probably every other parent liked the most because it was instrumental, had a good melody and was less than 2 minutes long.

We realized that “Carol of the Bells” was becoming popular and it kept coming back every year, then it got some play in a TV show and then a trailer, so we were like “Wow, we should do another one for fun,” and we just kept doing more Christmas songs over the years – up until this year when we decided to do a full-length. So the full-length has 2 original songs “Flurries” and “Sleddin Hill” (Check out Flurries on the band’s website!). All the other songs are covers that we’ve done over the past four years. We are hoping that people enjoy it and take it for what it is. That they play it every single year for as long as Christmas is popular.

If you’re playing for the right reason, that is if you are playing music because you enjoy you’re instrument, you enjoy performing, writing and being creative, then you should give it everything you’ve got.

As far as the faith element is concerned, I’ve always thought that faith in God, faith in Jesus, if you are a Christian, then its who you are, its in your heart. It’s not something that you attach to certain things and not to others in your life. Being a Christian, according to the Bible, you become a new person and you have a new heart. You are changed forever. So therefore everything that comes out of you musically, creatively, artistically changes as well. So being a faith-based band really just means that you have people that love Jesus and  whose lives are changed by him and are creating music that glorifies God but also loves people. Not just music that they write that has Christian elements. Just write good music and do it for the right reasons. Never stop putting your hope in Jesus in every aspect of your life, not just in your band.

Leveler is available for download on iTunes and Amazon and for streaming on Spotify. August Burns Red Presents: Sleddin Hill will be available on October 9th. You can catch August Burns Red at the remaining dates before they hop the pond and begin their European tour: