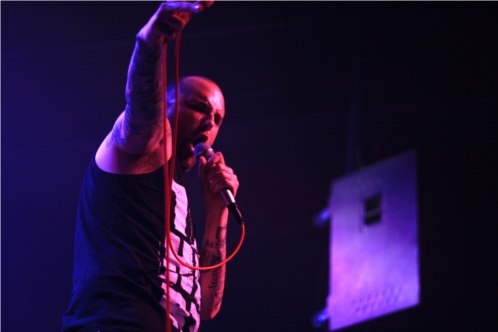 The Overseer knew they had a tall order as the opening band for some of hardcore’s titans but they managed to rile the crowd into a tumultuous pile with songs like “Arkansas” and “Traitor”. The passion emoted by the band during the performance was impressive – this band clearly understood that as an opening band, they had to give more than 110% if they wanted to be remembered the next day after the performances the crowd was about to witness from the next few bands. I can guarantee more than a few people were converted to Overseer fans and we predict great things for them down the road.

For those who had the opportunity to see The Color Morale on some of their very first tours a few years back knew they were good, but nothing like they are now. TCM has made leaps and bounds as performers. Lead vocalist Garret Rapp stalked the stage and worked the crowd with such intensity it was impossible not to get drawn in. They charged their way through songs like “Nerve Endings” and “Be Longing Always” with such ferocity that they more than proved they could hold their own on a tour like this.

Of Mice & Men have become a staple in the hardcore scene because they promise to “Go harder than any band they tour with” and lucky for us, they are a band that keeps their promises. With frontman Austin Carlile orchestrating the crowd chaos from beginning to end, the sheer level of passion and energy these guys put into their performance is outrageous. You can’t go to an Of Mice & Men show and not have a good time. The band played fan favorites like “O.G. Loko”, “Let Live” and “I’m a Monster” but where they really shined is during their new material, which got a enthusiastic response from the crowd. The band surged around the stage with even more energy than before as Carlile belted out “The Flood” and closed the set with “The Depths”.

The only downside to their set is that you can’t help but miss former vocalist Shayley Bourget’s clear voice soaring out on songs like “Let Live”. Aaron Pauley of Jamie’s Elsewhere fame is filling in the vocals/bass but it’s just not the same. He does a decent job of keeping up with the rest of the band but there doesn’t seem to be much of a “wow” factor with him.

We know there is a big ball game going on tonight but I’m pretty sure that sign out front says sold out. Thank you so much!” said August Burns Red frontman Jake Luhrs as they finished their first song. He was referring to the Denver Broncos game in which Peyton Manning failed to be the golden god we all expected him to be.

But while Peyton Manning didn’t live up to our expectations, August Burns Red always delivers a phenomenal show. The sheer amount of energy they put into their performance while still maintaining the level of technicality in the music is unparalleled, and definitely something you don’t see in younger ‘core bands. Fans clambered over one another as the band played crowd favorite like “Marianas Trench” and “Back Burner” as well as several tracks off their last album Leveler, including “Internal Cannon”, “Cutting the Ties” and “Salt & Light”.

One of the things that never ceases to amaze us about August Burns Red is their ability to bring those with faith and those without under the same banner to celebrate one thing, good music. During “Salt & Light”, Jake Luhrs held his hands over the crowd as they joined in as an impromptu choir for the last part of the song – both band and fans coming together for a holy moment.

Catch August Burns Red and the rest of the bands at these remaining tour dates before its too late – this is one show you won’t want to miss.