Sister Crayon opened the show with a moody vibe that matched their equally moody electronic sound. Enigmatic front-woman Terra Lopez bobbed and weaved in between the low lights, her haunting vocals resonated over the crowd. Songs like “(in)Reverse”  showed off the “techie” side of Sister Crayon’s sound

but unless you are a techie-music nerd, you probably won’t appreciate half of what’s going on onstage during a their show. Where they really shine is during songs like “Thief Boxer, Asleep”, which has an authentic human element when Terra Lopez abandons the technology and sings out in an almost-opera soprano voice. She lowered the microphone and belted out the song over the crowd, her voice carrying as far as the back of the venue. This is one band you will want to keep your eye on in the next year or so. They have big things ahead of them.

It isn’t hard to run out of ways to say this next band was boring and bland. Helvetia is the kind of band you keepwaiting really “wow” you but that awe-moment never comes. Don’t get me wrong, the band can jam but you can only take technicality so far before you lose the connection with your audience. The band themselves seemed bored and all the songs felt like filler in between lead singer Jason Albertini’s guitar solos, of which there was one in every song (however, they were also the best part of the set.)

Half the crowd almost cried for joy when Built to Spill took to the stage and began playing fan-favorite “Traces”. Built to Spill are indie rock legends and their style is to let the audience take away their own interpretation of their music. This bleeds over into their performance as they simply stand and play their songs, manipulating the emotion of their audience by the sounds they create and the way they play the songs. The crowd held their breath in abated awe as the band drifted through their slower songs like “Life’s a Dream” and “Nowhere Nothin’ F*ckup” before stirring the crowd into a dance party to upbeat tracks like “Sidewalk”, “Disotopian Dream Girl” and “Pat” 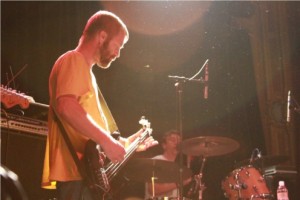 included “Crimson & Clover”, a Tommy James and the Shondells cover, where Sister Crayon vocalist Terra Lopez and Helvetia vocalist Jason Albertini joined in on backup vocals. They closed the encore with “Broken Chairs”, originally an 8-minute song stretched into a 12-minute outtro as the band members jammed together, each one playing his part before free-styling and riffing off the previous member’s contribution. Watching this kind of synchronicity onstage is nothing short of amazing.

Their albums don’t do this band justice – you need to see them live to fully understand their genius and even then you feel like they are holding back and not showcasing their talents to its full capability. Built to Spill doesn’t plan to release any new material until next year and Denver was one of the last stops on their tour but keep your eyes peeled for new BTS news on their website and facebook page.