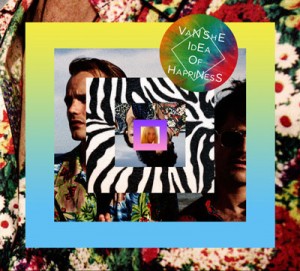 It’s been a couple of years since new material has been released by Van She, but their second album released this year, Idea of Happiness, is one that shows the Australian electropop outfit picking up where they left off. Throwing in a few twists and turns in the album, the title track and first single from the album, “Idea of Happiness” is an upbeat, dance floor-inviting song with hints of Young Love all over the track. Young Love is a NYC-based artist that has been dormant the past couple of years but is a telling comparison to Van She. The band’s albums are filled with up-tempo tracks that fit into today’s EDM-filled musical landscape and shows the collective’s future potential of generating tracks that could impact a larger audience.

The influence of island sounds, a steel drum on ‘Coconuts’, tracks called ‘Calypso’ and ‘Jamaica’, are standouts and shows the band’s openness towards outside influences and new sounds. Highlights on The Idea Of Happiness come to the surface when the vocals are taken out of the equation, such as on the aforementioned ‘Coconuts’ and on ‘Radio Waves I’, the former possessing a synth-heavy sound with a muddled AM radio intro and the latter taking the listener to a tropical island either out on a booze cruise or rolling down the boulevard with the top down.

Van She - Idea of Happiness