Each year ACL brings some of the best acts in the world to our little/big town and what feels like the entire population of Austin takes over Zilker park. What’s usually a quaint area to walk your dogs, jog by the lake or toss around a frisbee, turns into one of the most renowned festivals to ever hit the music scene. The park was more packed than we’ve ever seen it, making talks of a two-weekend fest next year not seem so crazy. Despite the crowds everyone was in high spirits and ready for the best weekend of the year.

It’s usually safe to show up to ACL on Friday around 2 p.m. or so, but this year The Wombats, He’s My Brother, She’s My Sister and Los Campesinos! were acts no one wanted to miss. About 2,000 people showed up for The Wombats and sang along to ‘Jump into the Fog,’ and ‘Let’s Dance to Joy Division.’ The band joked that if less than 50 people showed up, one of them was going to play in their boxers.

Long-time Texas favorites, Asleep at the Wheel, took the stage early Friday and loyal fans along with first-timers bounced along to Texas country. Swedish folk group, First Aid Kit, began a little after one for some gorgeous harmonizing and romantic melodies. Chalk it up to the sweet, easy nature of the group, but Austin fans are intoxicated with the duo. Nodding to American country, they cooed their hit, ‘Emmylou’ to cheers from the crowd.

As the day grew sunnier and sweatier, Delta Spirit took the stage for a raspy, down-to-earth performance. Screaming, “My mom’s here! Say hi to my mom, Debbie!” the San Diego group warmed Austinite hearts. British boy, Ben Howard was next and brought in a huge crowd of hand-clapping, swaying girls and guys for one of the most chill sets of the day.

ACL is a marathon, not a sprint, and because this is Austin the very best food trucks from around the city lined up to fuel the weekend. I’m enamored with the Hot-n-Crunchy Fried Chicken + Avocado cone from Hudson on the Bend’s Mighty Cone, but Tiff’s Treats, Austin’s Pizza, 2nd Bar + Kitchen, Chi’lantro, Guero’s and SO many other vendors brought the best of their menus. 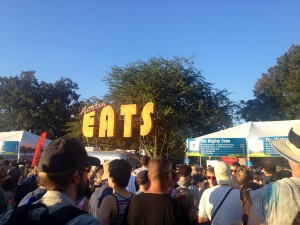 Finding friends at the festival is daunting and almost even impossible when AT&T is failing disastrously, leaving you wandering around aimlessly considering smoke signals and SOS messages. However this year, almost every group is rocking a creative flag, showing phone companies that we don’t even need them!

By the time everyone made their way to the park, Tegan and Sara and Florence + the Machine drew gaggles of girls who just wanted to sing along at the top of their lungs and dance for the hour-long sets. Tegan and Sara are incredibly fun on stage and make you wish they were your best friends, but when it came to their new single, ‘Closer’ they were flat and notes felt almost dull. Florence regaled the crowd with hits from her 2011 album, ‘Ceremonials.’

Weezer’s been around for what feels like forever, but this was his first time performing at ACL. Front man, Rivers Cuomo, hammed it up, kicking a ball around stage before they began and then gave followers exactly what they wanted, playing tracks from all of their albums. Familiar with Zilker from his SXSW performance back in March, M. Ward hummed his tunes for a loyal, relaxed group.

With so many dubstep converts over the last year, the battle between Avicii and The Black Keys left friends dividing up and promising to “find each other” after the show. As headliners and the grand finale, The Black Keys played all of their best, reminding B-Sides why we can’t get enough of this incredible band. Avicii’s set rivaled that of Skrillex’s performance last year, and while no dancing kids made their way onto the stage, the set design, lights, smoke and sheer energy brought a pounding force to ACL that leaves newcomers saying, “that was the best night of my life.”