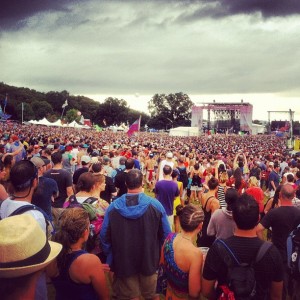 ACL Day 2 started out slow with festival attendees holding out hope that the muggy weather would clear up. Ironically, once everyone packed into the park, around 5 p.m., the heavy rains crashed in and left us soaked and muddy. In one of those, “you can run, but you can’t hide,” scenarios, folks flocked under tents and brought out the umbrellas, but after the third downpour, they embraced the storms and sloshed through the mud to the next show.

The morning shows kicked off with Caveman, Quiet Company and Civil Twilight. B-Sides spoke with Civil Twilight yesterday and loved how humble the band was. Originally from South Africa, this group played all of our favorites and new, but loyal fans walked away from the show after an almost religious experience. 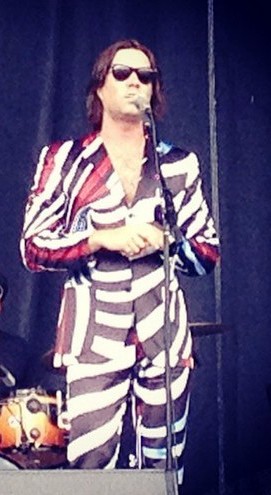 Rufus Wainwright rocked out in one of the most ridiculous outfits to grace ACL. My least favorite of the Wainwrights, I was appeased when he brought up his sister’s new album, ‘Come Home to Mama.’ He’s an old classic (20 years in the making), with a haunting, and incredibly unique voice, but the audience was split with some making fun of him and others worshipping the ground he walked on. At one point, Rufus got political in our liberal city saying, “I’ve boiled this election down to one thing. Women’s rights. Vote for Obama!” With a nod to Broadway, he dedicated a Judy Garland song to Liza Minnelli, re-naming it, “The Bitch that Got Away.”

A big fan of Austin himself, Kishi Bashi took his solo career to ACL for the first time this year. He’s performed in Austin before with Regina Spektor and Of Montreal, but it was a treat to hear him live and experience his looping technique first-hand. When B-Sides met with him, he said, “I usually hang out on South Congress and try to avoid 6th St.” Take his advice to heart, kids.

The Shins performed at the SXSW free show at Zilker last year and while everyone loves this group, shouts of “Play the Garden State song!” rang through the air. Called, “a mix between Mumford & Sons and the Avett Brothers,” The Punch Brothers had indie-Austin kids dancing around in circles, bouncing and bobbing like they were at the Texas State Fair.

Big K.R.I.T. brought something for the city’s rap fans and Bassnectar brought a HUGE muddy crowd later in the evening, leading to a sauna-like dance party that extended way past the Honda stage. Just as flashy as Friday’s Avicii show, Bassnectar’s contrasting moods and extreme bass prepped the crowd for Saturday’s headliners.

And then came the great Jack White vs. Neil Young debate. Some people justified their decision with, “I may never get a chance to see Neil Young again, not that he’s going to die or anything, but he may never come to Austin again.” Several young ACL goers went so far as to say, “I don’t like either, so…I’m leaving.” Whoever fans ended up choosing, they were not disappointed. Jack White decked was accompanied by an all-female backing band and served a bevy of crowd-pleasers that included a rousing performance of ‘Seven Nation Army,’ which whipped the crowd into a frenzied sing-a-long.  Neil Young performed with his famous Gibson Les Paul guitar ringing out powerful favorites like, ‘Walk Like a Giant,’ and ‘Hey, Hey, My, My.’