ON RADAR: Punks on Mars 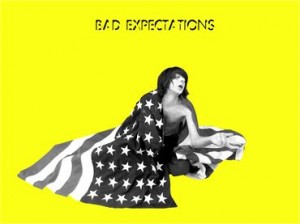 Punks on Mars was formed as a recording/ art project by Ryan Howe in 2010. Emerging from his tenure as space-funk-cyber-punker Luke Perry, (2008-2010, r.i.p.) and a whole slew of other “bizarro” electronic projects, Howe began infusing rock n’ roll forms into his space-aged pallet , delivering low fidelity power pop and punk tunes alongside half-baked interstellar sewerscapes and radio jingles.

Now, having prominently tagged his name on the bathroom stall of the zeitgeist, Howe has abandoned any and all lo-fi fetishism for a fully articulated powerpunk- goes-pop pastiche sound he picked up while cruising for bandmates in the Lower East Side, Birmingham and the plasticy strip malls of Mars.

After briefly touring America as a five-piece, Punks on Mars hit the studio to record the project’s first full band release, the forthcoming Bad Expectations, which features songs written by bassist/ pop mastermind Andrea Schiavelli (of The Eyes of Love, Polyester Raincoat). Punks on Mars is ON-RADAR here at B-Sides.