2012 has been a big year for goth-metalcore band Motionless in White. After becoming one of the “Must-See” bands on this year’s impressive Warped Tour line-up, Motionless debuted their new sound on their second full-length album Infamous. MIW is now on the Infamous tour, their first full-headlining tour across the nation, and one thing is for sure – there is nothing “motionless” about this band.

Support bands Crown the Empire, Upon this Dawning, Stick to Your Guns and Chelsea Grin riled the crowd each in their own right but nothing matches the devotion and intense energy evoked by the black-clad crowd that screamed their adulation when Motionless in White’s intro track began and the band strode out on stage.

The band began the set with a song off their new album called “If It’s Dead, We’ll Kill It”, which got a mixed reaction from the crowd. Motionless in White definitely built a name for themselves by having one of the most intense live shows on the hardcore scene today and they never fail to get better with each performance. The band launched fan-favorite song “Abigail” after their opening song and the set only escalated from there. Frontman Chris Motionless looked out over the crowd with a maniacal grin on his face, marveling in the insanity as the band played through “We Only Come Out at Night”, “Scissorhands” and “Creatures”. 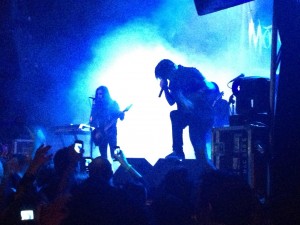 “We’ve played every song off of our first album Creatures but two – is it ok if we play one of those songs for you tonight?” to which he received and enthusiastic “Yes!” followed by a series of shrieks from the fans. “Pull out your lighters! or cell phones! This song is called City Lights!”

Lighters and cell phones drifted through the air in a haunting vigil as the band lined the front of the stage, becoming engulfed in smoke pillars from the cannons at the front of the stage as the song reached its zenith. Taking a cue from one of their main influences Marilyn Manson, this tour is the one of the first times Motionless in White has incorporated Manson-esque elements like smoke, confetti and fake snow into their live performance. It definitely makes you wonder as the band gets bigger, if they will start incorporating the big, dramatic sets like Manson. We will keep our fingers crossed. 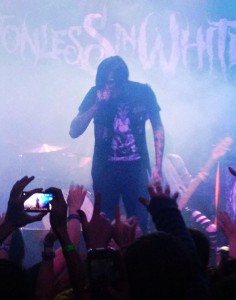 Always saving the best for last, Motionless in White riled the crowd into fast and furious moshpits during “Puppets” before leaving the stage. The last band member hadn’t even gotten off the stage before the crowd started the encore song chant, to which Motionless obliged immediately, launching into the new single “Devil’s Night”, which, in truth, sounds even better live than it does on the album. The band closed out their impressive set with “Immaculate Misconception”, another fan favorite to which the seemingly-exhausted crowd formed into a massive moshpit while the band danced across the stage, reveling in the chaos they caused.

Motionless in White is currently finishing up the Infamous Tour with Crown the Empire, Upon This Dawning, Stick to Your Guns and Chelsea Grin. Their new album Infamous is available for purchase on iTunes and Amazon as well as for streaming on Spotify.