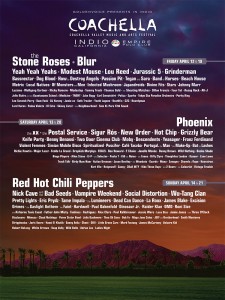 The lineup for Coachella 2013 has been announced. Headliners for the 2 weekend 3-day festival will be the recently reunited The Stone Roses, Phoenix and Red Hot Chili Peppers. Other bands to perform include a reunited The Postal Service, Blur, Yeah Yeah Yeahs, Modest Mouse, the xx, Nick Cave and the Bad Seeds, Vampire Weekend, Jurassic 5, New Order, Sigur Ros, Social Distortion, Wu-Tang Clan, Bassnectar, How To Destory Angels, Passion Pit, Band of Horses, Two Door Cinema Club, Moby, Franz Ferdinand, Violent Femmes, The Lumineers and more. After rumors swirled prior to the announcement that the Rolling Stones were going to perform, recent reports indicated that the legendary band would not in fact be playing. The Coachella Twitter feed posted a picture of a “polo ball” in a “polo field,” perhaps trying to cover for the same photo posted earlier in the month.

First time reunions are a trademark of the Coachella Valley Music and Arts Festival. This year’s lineup confirms the rumors that The Postal Service would be performing alongside The Stone Roses, who reunited last year and had already played shows and festivals in Europe. Blur reunited in 2009 but had yet to tour the U.S. since the announcement. The Damon Albarn-fronted band had performed various festivals in Europe but Albarn was busy with recording new Blur material. Nick Cave may be quite busy during the weekend as his band, Nick Cave and the Bad Seeds are scheduled to perform as well as the side project to the band, Grinderman, is also a performer. Grinderman had disbanded in 2011 to focus on The Bad Seeds material. Jurassic 5 having disbanded in 2007, will reunite for the festival. Violent Femmes had last performed in 2007 and endured many disputes regarding the use of “Blister in the Sun” in a commercial for a U.S. fast-food chain. Subsequent lawsuit between band-members over ownership and royalties ensued and no activity with the band had occurred until the Coachella announcement.

Tickets for the lineup sold out the pre-sale and the remaining tickets will be put on sale January 29, 2013 at 10am PT. The Coachella Valley Music and Arts Festival will take place over the course of two weekends, April 12-14 and April 19-21.