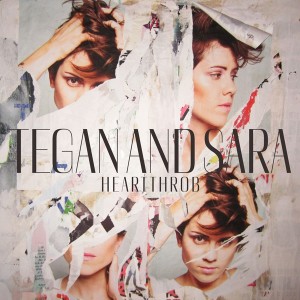 Sister folk-rock duo Tegan and Sara are back with their new album “Heartthrob”, a far cry from their indie-rock sound that made them famous. “We did have to make a conscious effort to make our record sonically more smooth and pleasing…We didn’t want to take a small step. We wanted to take a big step.” Tegan told Rolling Stone in an interview before the albums release on January 29th.

The album was co-produced by Greg Kurstin and Mike Elizondo, who have worked with artists like Ke$ha, Lily Allen and Maroon 5, but fans don’t need to worry that Tegan and Sara have sold-out and lost their indie-cred. The Quin sisters haven’t traded style for substance. Despite the waves of electronica and synth the album is saturated in, they still managed to put their same amount of heart and authenticity into their new material as with their old. “Heartthrob” explores all the facets of a relationship, from initial attraction (“Closer”) all the way to the inevitable break-up and heartbreak (“I Was A Fool” and “How Come You Don’t Want Me”). “Heartthrob really fit for me because . . . I idolize the people that I date, I truly put them up on a pedestal, so it really resonated with me.” said Tegan in that same interview with Rolling Stone.

That idolization plays a major role in the lyrical content of the album as the heartbreak and break-up songs are the spots where this album really shines. “I Was a Fool” and “Now I’m All Messed Up” seethe with fresh heartbreak and 80’s-eqsue synth for an two of the best songs on the album. Songs like “Goodbye,Goodbye” and “How Come You Don’t Want Me” are ridiculously catchy beats-wise but the real hook for these songs are the biting lyrics that chastise a former lover.

“Heartthrob” is now available for purchase on iTunes and for streaming on spotify. Tegan and Sara have posted a few  tour dates on their website. Check those out below along with the music video for their debut single “Closer”.