Holding your own in a tour with a band like letlive is no easy feat but California/New York band Night Verses have been doing just fine. This atmospheric rock band has been bouncing around the scene for a little over a year now and we couldn’t help but take notice upon the release of their debut EP Out of the Sky. We caught up with Night Verses vocalist (and former The Sleeping vocalist) Douglas Robinson when they passed through Denver to talk about the music, the meaning and the message behind the band.

What’s the story behind the band name?

Night Verses just comes from the mood of the band. We consider ourselves a very moody, atmospheric band and we wanted something that best fits our vibe, you know? So we went for the name Night Verses because we thought, with what we were trying to do, be very moody but still poetic in a sense and not just like focus on one thing – we kind of want to give everybody all aspects of art and music that we appreciate. So I think thats where it came from. When we first started, like the first week we were announced as a band we had the name “The Night”, but it was just really weird and really fuckin’ lame so right after that we switched to Night Verses. We didn’t want to lose that moody vibe – obviously everyone feels a lot moodier at night and we just kind of liked the vibe of that.

Yeah. I had met them in California when my old band was not really doing much and I went to L.A. Long story short, I ended up seeing them play on a whim and it wound up being really awesome music that I connected with right away. I felt like it was something we could grow together.

Was there any apprehension or pressure on your part as a vocalist coming into a instrumental band?

It was kind of weird because most instrumental bands have this notion that  you have to “show-off” as much as you can, but I think what really drew me to the band when I saw them was that they almost cater each instrument as a vocal. They were very aware of their song writing. They weren’t just trying to show off every 5 seconds. They had a really great balance between their musicianship and being catchy song-writers and I think I was very easily pulled in because I appreciate both aspects of that. They weren’t too extreme in one way or that other, which would have made me uncomfortable. They seemed to have a really good balance which is what attracted me the most.

Night Verses was just signed to Easy Killer? Tell me a little about how that happened?

We signed to Easy Killer out of St. Louis. Mike Judy is the owner and he is a big promoter is St. Louis. He had always taken care of my old band whenever they came through and He’s an all-around good dude. He approached me when he started the label and since we are a new band, we want to grow with people we respect and not just pick the first thing because its “cool”. Mike Judy had a really cool vision of what he wanted to do with this record label and how he wanted to only sign bands he respects for whatever type of music – right now he has anything from a piano player to a pop act, and they’re all just playing music. They aren’t trying to be “fashionistas” who are embroidering any kind of imagery or anything. They are just people who are playing music and know what they want as artists and that’s what really drew us to Easy Killer.

By now you probably know that fans and critics are comparing your new work in Night Verses to your previous work in The Sleeping – how do you feel your the music compares?

Its actually pretty crazy because I was kind of nervous about that at first because The Sleeping did really well. I don’t regret anything that The Sleeping did and I learned so much from it, we just ended because it was our time. When this started, I was a little nervous, but I would never do something, in my opinion, that would be less of a band I grew up being in and when I saw these dudes I was like I know this is where I’m supposed to be in my life from here on in. When the band started, I started becoming less and less nervous because I was like “You know what? this is music I love and I don’t care.” Then we started releasing things and nobody compared it – and if people did compare it, it was very positive. There was nothing negative ever and it made me feel good that I knew if my heart that I was comfortable enough to make a switch, jump to something new and meet these new people – and ultimately realize there won’t be any negative comparisons because these dudes, like how The Sleeping was in terms of being honest musicians who wanted to play their heart out, they (Night Verses members) are just very incredible musicians. People just kind of over-saw all of that, which was really awesome. 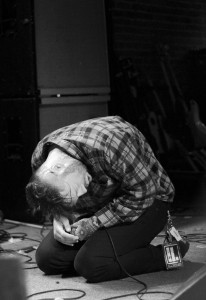 You said in a previous interview that “music’s lost a little bit of it’s message” – how did that manifest itself when you were writing and recording your EP?

I think thats a lot of reason why we did the EP for free. Right now, a lot of bands, artists and music in general, there just a lot of it out there thats just not from the heart. Obviously this has been happening since the beginning of music in the popular part of culture, you know what I mean? There are all those people just trying to make a buck, but now more-so than ever, within every scene and genre, there needs to be more artists that bring it back to old school times, just doing it for the message of it, the meaning of it and the artistic integrity of it. This band got together and we all felt like that – before I even talked to them about joining the band, that was their vibe too. So I think when we got together to write the EP, it was just “Well we know what we want to do, so we’re going to write about.” But again, we don’t want to harp on it or anything. People do do it for money but there are others who do it for integrity – we don’t dwell on it by any means but it definitely gives us a fire to write what we want to write because we care how we’re perceived. We know that we’re honest musicians that are ready to do it for the sake of just art and I think thats something about us that has been shown to a lot of people, thats why we are excited about all the positive feedback.

As of right now, instead of inundating the internet with information, Night Verses have kept things under wraps and on a “need-to-know” basis – do you think social media and the flood of information has helped bands’ relationship with their fans? or do you think it has a had a negative impact?

It depends on what type of artist or whatever you are. it also depends on the message you have or the meaning behind what you’re doing. For us, we really don’t care about anything representing us except for our music. I mean obviously we care, we’re not dickheads or anything but our main focus is the music. We’re not trying to get 1,000 likes on a Facebook page – we just post things when we feel they are important and we just want to play music to people who miss honest music. Bands like Tool and what-not, those are bands that we connect with on that level of doing their own thing, and the people that follow suit come along and jump on board. They like it for its passion and its music – not some dumb, money-making crap. It’s all for, again, the honesty and integrity of it. The vibe of our band is we’re not really into posting a million things and doing a million photoshoots, we don’t discourage it by any means but we’re just about the music.

Night Verses are now finishing up the letlive tour but possibly have a couple more tours in the works over the comings months. Keep up to date on all Night Verses information on the band’s Facebook page and grab a FREE download their debut EP Out of the Sky here on the band’s website.