With a lineup that has most alternative rock fans drooling in anticipation, Letilive, HRVRD, Night Verses, Conditions and Rescuer all held their own for the night in Denver Colorado, delivering dynamic performances that would certainly put most other tours in 2013 to shame.

However, we here at B-Sides were here to see one band in particular and that band is Night Verses. Night Verses was born when former The Sleeping vocalist Douglas Robinson joined instrumentalists Nick DePirro, Reilly Herrera and Aric Improta out in Los Angeles after Robinson heard the band play at a local venue. Formerly an instrumental band, Robinson’s addition to the band gave the band a new direction as they still pursued the intricate instrumental qualities they possessed while layering in emotive vocals worthy of their instrumental skill. Musicality meets emotion and message – doesn’t get much better than that. 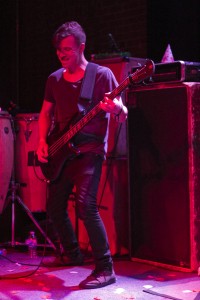 Before the band launched into their set, Robinson took to the front of the stage, saying “We’re not going to do a lot of talking in between songs. We’re just gonna play.” But this band doesn’t need mindless stage banter because once they get started, you can’t wait for the few seconds in between songs to be over so the next song can begin. Their music does the talking for them and thats the way they like it. Frontman Douglas Robinson leads the charge as the rest of the band follows with a wall of sound that grabs you by the ears and won’t let go. The band performed all the songs off their debut EP Out of the Sky, most notably “From the Shadows Where I’m Low” and “Be Happy With Yourself, I’m Staying Here in Hell”. For a band who has been together for such a short time, the cohesive performance boasts of a band who has been performing together for 10 years.

Night Verses are currently on tour with Letlive but if you missed them this time around, keep an eye on the tour dates section of the band’s Facebook page as they have a couple tours they will be announcing soon. Also download the band’s EP Out of the Sky for free at the band’s website and check out our interview with Douglas Robinson here on B-Sides!