INTERVIEW: Family of the Year

Family of the Year have been making a name for themselves with their positive vibe and dynamic live-shows. Having opened for well-known acts like Edward Sharpe and the Magnetic Zeroes and Ben Folds Five, the band is currently on a headlining tour promoting their new album Loma Vista. We caught up with band members Christina Schreoter (Vocals and Keys), James Buckey (guitar) and Sebastian Keefe (drums) at their show in Denver to talk about their new music video, writing on tour and their thoughts on the state of music today.

Do you guys have any exciting plans for Record Store Day?

Sebastian ): We are going to be in Seattle, doing an in-store show in Seattle  with our touring buddies The Mowglis.

You guys have been crazy busy recently but seem to be constantly working on new material – how is the writing process different when you’re on the road versus downtime at home?

Christina : When we’re at home we write a whole lot more.

Sebastian:  Yeah, like it is easier to come together and work on things. When we’re on the road, most of the things we get accomplished individually, and then we share the ideas later on but there is very little time for us to collaborate. There is a lot of time where you are by yourself with your own thoughts but not so many opportunities to collaborate musically. 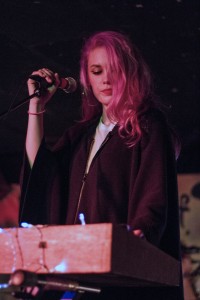 You guys just released a music video for your song “Hero” featuring professional bull-rider Nicolas Sartor – how did that all come about? What’s the story behind having him in the video?

Sebastian: The concept of it came from the director Isaac Rentz. He’s a great director who has done some great videos lately. It was his idea and we just thought it was a great.

Christina: It was very American but not cliche.

Sebastian: What we thought was important was to cast the right person as the main character. We went back and forth about whether it should be an actor that can play a rodeo guy or find a rodeo guy who can act, and I guess it worked out that the director found this guy and his daughter was perfect, as well. It just really all worked out and the rodeo setting was like this guy’s backyard. His father had built this rodeo setting. It was all very organic and real, which is why it has that genuine feel.

Christina: It was like we sat in on something that would have happened anyway versus staging an event. None of it seemed fake because it wasn’t. It was real. I guess they do those events like twice a week or something like that.

You guys have been touring non-stop and playing show after show, what is the one song you never get tired of playing?

Sebastian: Nowadays I’m having a really good time playing a song called “In The End”. I feel like I’m finally getting good at it (Laughs). But I’ll never get tired of playing “Diversity”.

Christina: “Psyche or Like Scope”, which is a song off our last record. We’ve been playing that one lately and it’s always fun.

Some artists and musicians I’ve talked to recently feel like music has lost a bit of its “message”, in that there are no longer a lot of bands making music just for the love of it rather than pursuing the almighty dollar. What are your thoughts on this?

Sebastian: I read a blog post earlier about some guy complaining about the state of the music being released nowadays and I am personally pretty happy with it. But, I think that there is more of every kind of music out there than there ever was. Depending on what you want to listen to, maybe these people you are referencing are talking about what’s being put on the radio or something because I guess I do see a lot of similar thoughts and ideas thats in the music on the radio right now. But in the bigger picture, I think there is tons of fantastic music.

Sebastian: Yeah! That awful period where it was all nu-metal and boy bands.

James: But it’s also like now everyone has a much shorter attention span and won’t wait around for 2 years for someone to put out another album. It’s like “You guys aren’t putting out new music every 5 seconds? Okay, peace, I’m out.” It’s just different.

Christina: With things like iPods and Spotify, everything is unlimited. It’s not having a record collection of a specific 20 bands that you listen to. So many more people like so much more different kinds of music, like no one is being as snobby anymore.

Sebastian: That’s kind of what I was getting at. Like there is so much more, and it’s probably really frustrating for those people who only use those mainstream avenues to get music, but I think everything is pretty good right now.

Family of the Year is currently on their headlining tour of the states before heading off for some Canadian dates (dates below). Catch them at a show near you and grab a copy of their new album Loma Vista on Amazon and iTunes.