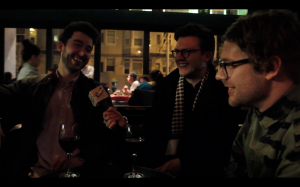 Man Without Country is a duo, who hail from Cardiff, South Wales comprised of Tomas Greenhalf and Ryan James. Their name conveys their “sense of not belonging”. Their debut album, Foe, was released in 2012 and recently embarked on a short tour of the U.S. that also included an appearance at SXSW.

The band took a moment while they were in San Francisco, CA to talk about their visit to the City by the Bay, their debut album, “Foe”, remixes and more on B-Sides On-Air.