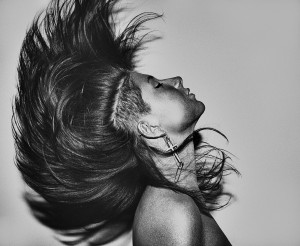 The Los Angeles-based band, Kitten, is making lots of noise in music today and in a good way. Led by their founder and energetic, talented lead singer, Chloe Chaidez has been in music since she was conceived. Her father was a member of the East LA punk band, Thee Undertakers during the 80s and eventually inspired her to venture into her own path. Rather than going into punk, Chaidez rebelled by getting into the 80s New Wave bands- Tears For Fears, Depeche Mode and Eurythmics amongst others; an up-bringing that greatly influences her band’s music today.

Kitten has played SXSW three times and as the band’s music matures, so does their stage presence. Chaidez incorporates her own take on punk rock with an energetic live show backed by electronics. The band’s debut LP is due out sometime this year. Shortly before the band’s tour opening for Paramore, Chloe Chaidez spoke with B-Sides.

B-Sides: What are the pluses and minuses of having a punk-rock dad?

CC: I think my dad was kind of an anomaly in the punk rock LA scene, he was in a bunch of punk bands but he actually loves classic rock, like every dad. He introduced me to a lot of punk music but he also really likes classic rock, so I think the downside is that I’m just sick of it at this point that I don’t want to hear another Pink Floyd or Led Zeppelin song. (laughs) I really love the stuff, but yeah, the upside is that even though it was a lot of classic rock that it was good that I had that [influence].

B-Sides: So when you were growing up you mentioned listening to the band The Germs. Did you have your own pseudonym like Belinda Carlisle did with her alter-ego Dottie Danger?

CC: No, but I was a gymnast and they used to call me Biscuit. (laughs) I don’t know what kind of punk rock name that is but that was the only nickname I had.

CC: Because I was short and stubby and the youngest and they thought I looked like a little biscuit which should have been emotionally damaging for me at that point, but it’s good now. (laughs)

B-Sides: How long were you a gymnast for, were you good at it and did you want to compete at a high level like in the Olympics?

CC: Not too toot my own horn but I was state champion twice! Gymnastics was a huge part of my life up until I turned 13 and then I kind of had to pick between that and music. Plus, it just wasn’t not as fun anymore; it was taking up all my life I couldn’t really practice music.

B-Sides: So, in theory you could have been competing as a teammate with McKayla Maroney in the 2012 Olympics?

CC: Maybe, I don’t know. (laughs) I pretend that could’ve happened but that’s another level up; gymnastics is weird, like, to even compete, you have to be doing it for years. It’s not like soccer but at the same time I don’t think I could have been an elite or in the Olympics. It’s just not something I was passionate about, music is something that I was super passionate about at a young age. Gymnastics at a certain point, just kind of became a job so, I would be doing gymnastics but thinking about lyrics or writing a song. That’s how music became something I really wanted to do but gymnastics taught me a lot too. I still have a lot of friends from it.

B-Sides: Since you have a lot of training, do you still work out as if you were a gymnast, do you have time for that?

CC: A little bit before a show- lots of our shows are so physical for me, it’s not because that I want them to be for some reason. When I’m on stage, I have a lot of energy but sometimes after the first show of a tour, I’ll come offstage and will be out of breath so, before I try to do some running. I still try to keep it up- I can beat the guys at push-ups! (laughs)

B-Sides: Your live shows are absolutely crazy where people are throwing elbows, just feeding off of your energy. Is it a process for you to feed off the audience or do you just want to get them hyped up and get them into the set?

CC: I think it’s both. I think the minute I step onto a stage I just kind of forget what’s going on. It’s one of my true forms of expression. At first it was just getting everyone’s eyes on me at that moment, like spraying water on myself, spitting on someone or chipping my teeth, everyone in this room needs to be watching me now. I don’t know, there must be something wrong with me but that’s just how I feel. Ritual-wise, I say a prayer, I touch my toes.

B-Sides: You touch your toes?

CC: Yes, I do a little stretching. (laughs)

B-Sides: A lot of people are blown away with your music because in some respect it could be mistaken as a discovery of never-before heard lost 80s hits. What was that first band or song that got you into music and interested to dig into others like them?

CC: I think it was Cat Power’s Jukebox record, which doesn’t reflect what I do now musically at all, but in eighth grade that was the first record that really emotionally struck me. This sounds really dumb but I remember in the eighth grade I got a C in math class and my mom just freaked out! It’s ironic now because I was eventually homeschooled but I remembered I just sat in my room really late at night and I was like, “what am I going to do?!” She was so mad at me and I remember just listening to that record the whole way through and I was like Cat Power is the only person that gets me. It was at that moment I realized I can relate to people in the same way.

B-Sides: It seems like your mother was trying to hold down the fort with the family and keep you on the straight an narrow path. How does she feel about you going in the other direction and not becoming a lawyer or doctor?

CC: My brother and I are complete opposites, well not complete opposites, but he goes to M.I.T. We’re just going in completely different paths, so she’s cool with it now. My dad dropped out in the ninth grade and joined a punk band and my mom went to UCLA so, they’re kind of different. He was always like, “Natalie leave her alone. She’s going to be a rock star!” My mom was always kind of worried then but when she realized that music was something that could work out in the long run, she kind of stopped hating so hard.

B-Sides: How did the tour with Paramore come about? We saw Haley was tweeting about you guys and how she was excited you guys were going to be opening for them.

CC: We played a show with them in August. I remember it was a decision between doing a show with them or three or four days with Charlie XCX. It was a really hard decision but we thought Paramore would be a better decision, so we played the show with them. They really liked us, we really liked them, we just kind of hit it off. They told us they were going on tour for the new record and we were like, “okay, ha ha. It would be crazy but I doubt that’s going to happen.” But we kept in touch by texting and I guess she kind of saw a little bit of herself in me maybe, but yeah, that’s how it happened.

B-Sides: We see you both on stage and there may be the same approach but not like you’re doing what she does or vice versa but there are a lot of similarities.

CC: It will be an interesting match because we don’t play their type of music but their fans really dug us. We got so many fans from that one Pomona show and I think their new record, especially how it’s going it’s a little more electronic, a little more of the direction we’ve been going so, I think the two are going to merge together nicely. They’re at a spot in their career, especially Haley, where we’re not each other’s competition in any way. With some of your peers it’s like, “oh, okay but I’m still watching out for where you’re going to go”, but not with Haley because they’re so established that they’re not worried about it.

B-Sides: Who would win in a battle in getting the most bruises while performing on stage you or Haley?

Kitten - Cut It Out [Official Video]