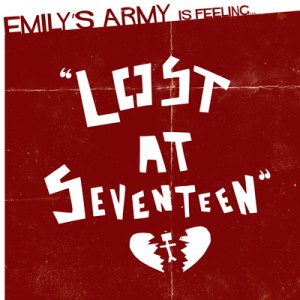 Sounding like a young Green Day and from Oakland, CA as well, up and coming punk rock band Emily’s Army just released their second full length album called Lost At Seventeen. Cole Becker (vocals/guitar), Max Becker (bass), Travis Neumann (guitar), and Joey Armstrong (drums) formed the band back in 2004 but under the name Raining Souls. They were inspired to change the name when the Becker brothers learned their young cousin Emily, had been suffering with Cystic Fibrosis her whole life. In 2011 when they were between the ages of 15 and 16 years old, the band released their debut album Don’t Be A D*** which featured teen angst and songs ranting about every day issues going on in the world. Songs like “Broadcast This” and “A**lete,” talked about rebellion against things like listening to commercial radio and the days when there were more pirate radio stations like KCUF. They also sung about athletes in the media that teens looked up to but that they no longer approved of because of those athletes scandals, such as the news about Tiger Woods cheating on his wife and Barry Bonds with steroid use. Lost At Seventeen continues on with the teen angst but at a level of a little more maturity, such as senior year in high school, with songs like “Part Time Bum” and “Lost at 17.” Lyrics like “Cuz I’m lost at seventeen, already tired of being tired. There’s a line for fools like me, but “their” brain-style is required and that line won’t catch me tipping, cuz the moon keeps me from slipping out of reach,” expresses teenage rebellion against who follow the norm of going off to college after high school like most high school graduates. The album as a whole has a very energetic feel with songs that teenagers can mosh and headbang to. This album not only projects their punk rock style, but it also dabbles in a style of rockabilly and a twang of country rock in songs like “Gubermensch,” “If Our Music Plays Again,” and “War.” Overall these kids sound like they are going to be the next big thing in punk rock as time goes on. Check out Emily’s Army this summer at the Vans Warped Tour of 2013!