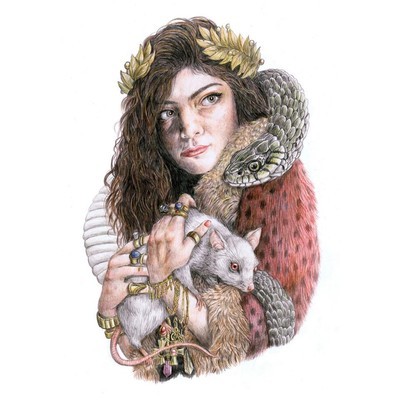 Sixteen year old New Zealander Ella Yelich-O’Connor, or better known as her musician name Lorde, released her debut EP called The Love Club back in 2012 and digitally re-released it last month online. Her latest EP called Tennis Court EP, was released in New Zealand earlier this month and is set to be released in late July for the United Kingdom, but no word for its release  in the US yet. Her hit single “Royals” from The Love Club was awarded Platinum twice in New Zealand shortly after its release. The track and her music itself has a fun pippy hip hop pop bounce (think Kimbra with a slight thug edge) to it. Lyrics in “Royals” like “And we’ll never be royals, it don’t run in our blood, that kind of lux just ain’t for us, we crave a different kind of buzz, let me be your ruler you can call me queen bee, and baby I’ll rule, I’ll rule, I’ll rule, I’ll rule let me live that fantasy,”give off the impression of a care free teenager who doesn’t care about becoming or imitating famous celebrities

who live the high life. Instead it gives the vibe of a young girl who wants fame among her peers and loves to live it up at events like school dances and parties. We also see this in the song with continued lyrics “My friends and I we’ve cracked the code, we count our dollars on the train to the party, and everyone who knows us knows that we’re fine with this, we didn’t come from money…But every song’s like gold teeth, Grey Goose, tripping in the bathroom, bloodstains, ball gowns, trashing the hotel room. We don’t care, we’re driving cadillacs in our dreams.” The album is catchy, fun, and has a little bit of spunky attitude thrown in! Lorde is currently touring in Australia, The Love Club is available for streaming on iTunes and Spotify.

Check out the music video for “Royals” here!