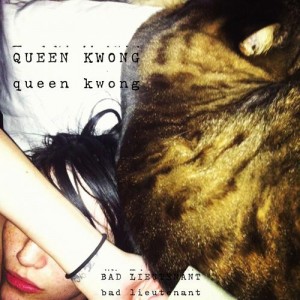 Originally from Denver, Colorado but discovered by Trent Reznor in his New Orleans studio, Carré Callaway, also known as the front woman of Queen Kwong began her fame into music when she opened for Nine Inch Nails on the 2005 With Teeth Tour.  When Callaway met Reznor, she moved to Los Angeles, California where she followed his influence for her music career, at the time her style was considered folksie singer/songwriter. She left the music scene for a few years before returning in 2009 as a band called Queen Kwong. The band became well known in LA, especially due to Queen Kwong’s unpredictable live performances. In 2010, they experienced a much wider audience thanks to NBC Los Angeles local indie radio, and the United Kingdom’s BBC Radio 6, which in turn featured the band’s first digitally released single called “Pet” off of their EP called Love Is A Bruise. In 2011 the band went on a fan funded Kickstarter tour to London, England and Paris, France. Callaway is currently managed by Scott Cohen and Richard Gottehrer, both also represent bands: The Raveonettes, Dum Dum Girls, and The Deer Tracks. Callaway herself has also written, filmed, and/or directed the some of Queen Kwong’s music videos such as “Ike Turner” and “Bitter Lips.” Queen Kwong released their 5 track EP known as Bad Lieutenant this past June 2013. The single “Bad Lieutenant” has a definite hard rock n’ roll feel to it with heavy percussion on repetition in the background. Callaway’s vocals have an eerie and almost innocent young girl sound to them. The song is a foot tapping catchy girl power hard rock jam that fans of The Pretty Reckless and Tegan & Sara will appreciate.