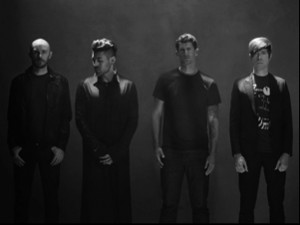 AFI have released the track, “I Hope You Suffer” from their forthcoming untitled album, set for release this September. The band has released short video trailers since May with mysterious black and white imagery leading up to the release of the first sample of new music from the Bay Area band since their last release, Crash Love, in 2009. Thus far, it’s been announced that AFI will be performing a few select dates that includes Riot Fest Chicago and Riot Fest & Sideshow in Denver, CO.

Although AFI has been on hiatus for some time, the band members have been occupied with their various projects. Lead singer/songwriter, Davey Havok and guitarist, Jade Puget, released their second album, Bright Blaqk Heaven, as the electronic act, Blaqk Audio, in 2012. Earlier this year, Havok released his first book, “Pop Kids,” which is based on the current generation of society and the effects of technology, new media outlets and celebrity. Drummer Adam Carson teamed up with members of American Steel to form The Reckless Kind, who released their debut album, Golden Age Thinking, last year. The ninth studio album that has yet to be titled, was produced by Gil Norton and will be released on their new record label, Republic Records.