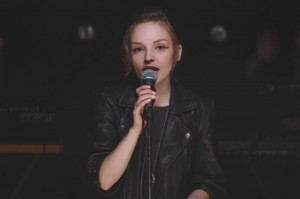 CHVRCHES is on fire right now and their debut album, “The Bones of What You Believe” comes out September 23 in the U.S. The Scottish electropop group released its music video for “The Mother We Share” last week although the single was released last year.

Lauren Mayberry shines front and center in between Iain Cook and Martin Doherty in the video as it follows along a somber looking women wandering the city in search for someone. Mayberry’s voice is very delicate but she plays up a heavy moto jacket over a black tee. Nasty Gal’s “Moto Zip Crop” jacket is a steal for under a $100 and if you aren’t ready to fully commit to leather, this utility jacket has leather sleeves for an edgy detail. An easy tee to throw on under the jacket, and one I have in three colors, is Gap’s burnout roll-sleeve T which is currently on sale.

You can only see Mayberry’s ‘fit from the waist up but she also has a simple long-chained necklace on so add to your burnout tee with a spiked chevron necklace. I’m a big fan of her messy updo also and she’s pushed back her bangs into a loose ponytail. Mayberry also always has killer and sharp eyeliner so I would again use Sephora brand’s high-precision brush in a jet black. To add a bit more badass to your eyeliner, trace above your jet black liner (or even on your lower lash) with one of Urban Decay’s Heavy Metal glitter liners. If you’re a lipstick person, try Stila’s After Glow lip color in bright tangerine or NARS’ Velvet Matte lipstick in Pink Cantaloupe.

Mayberry plays the perfect combination of sweet n’ rock in this trippy and electrifying video which splashes Cook and Doherty into the light at the right synth moment.

CHRVCHES played Mezzanine this past May and I would recommend seeing them at The Fox Theater in Oakland this November. Check out the video below, too.