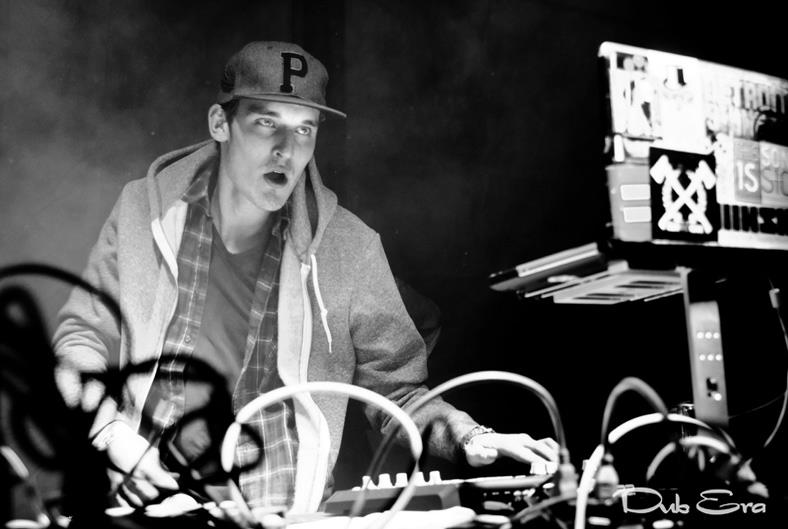 Hailing from Detroit, Michigan, GRiZ is an electronic mixing beats musician who is musically inspired by a variety of different time eras from both the past and the present. His music reflects different music genres from these eras such as jazz instruments combined with a 1970s vibe. It also reflects the way he sees people acting towards publicized events going on around the world, such as political issues in other countries while incorporating the people’s activism and rebellion to their oppressing governments. He recently finished his “Unbanned From Canada Tour” and will now be touring back in the United States.

Your music has a very futuristic sound mixed with different jazzy instruments such as the saxophone, what inspires your musical creativity?

That’s a tough one, the vibe of that era of that music, like the 50s or 70s vibe. A lot of that kind of stuff and then just like the energy of the live shows today. Also seasonal changes and traveling, coming home to Detroit and stuff like that.

When did you start making music?

I started producing music when I was around 14 years old. And started smoking weed and got this electronic music program from one of my friend’s older brothers, who was also the dude who was selling us weed and showing us all of this electronic music. And prior to that it was all practice and performance based. Whereas in this digital world, you have software where you can save your work and go back to it and create a whole symphony of sounds, add drums and stuff, which is wicked,wicked cool!

You are embarking on your first ever Canadian tour, can you explain why it is called the “Unbanned from Canada tour?”

Well I’m actually in Canada now, and this is actually my last show for the “Unbanned From Canada Tour,” and what happened was the first time in Canada was a little over a year ago in January and since we did not have the proper work visas, we just said that we were traveling to go snowboarding for the weekend and eight hours later in this questioning room; where they search your luggage, (it’s kind of a scary place), they kicked us out and banned us for a year because we lied to them… But we’re not bad people though!

Why is your name GRiZ, what is the meaning behind the name?

There is not a deep meaning behind it, it was this name that one of my roommates gave to me when he was wasted and it just kind of stuck.

You state on your website you do not use fancy equipment to record your work, how do you generally record and produce your music?

I just have really simple things. Like a guitar and saxophone, and I got a computer and some speakers and I just record all my stuff through an amplifier or into a microphone into my computer you know? Like I do not have these big mixing consoles and I do not record my work in a studio with sound dampening walls or pre-amps or dispersing units, delay units or anything like that. It’s not like a big budget production all this stuff is recorded on gear that cost me no more than $4,000. So the computer would be the most expensive, and it is just like a what-you-do-with-what-you-have kind of thing I think.

You are releasing your second album on September 14th, what can fans expect from this album is it a continuation of Mad Liberation or is it different?

It is sort of a continuation, I mean there is a lot of stuff on there that is bordering new ground. I sampled a lot less of mosaicing other people’s work and manipulating it, distorting it and creating it and making it my own. There is a lot more of me playing a lot of instruments such as guitar parts, bass parts, a lot of saxophone parts, and then getting a bunch of my friends and people who I have met over the past year/year and a half to play instruments, sing, or rap – just a lot of that kind of stuff, it’s a lot more of a home-grown thing and evolving more original and less sampled. And then it is a continuation, because I love that kind of sound and those vibes so I am going to stick to that kind of beat and overall it is like a really awesome record, it’s almost finished and I couldn’t be more excited for people to hear it!

Do you have a name for the new album yet? And does this name have a specific meaning to you?

Yeah this record is called Rebel Era. So the first one (Mad Liberation) is like the thesis, you know like the introduction, it’s kind of like how I felt about music, culture, and life for myself as I saw it at the time. I didn’t really understand what it meant to me, it was a lifestyle thing that I felt like I was learning what it meant. Now that it is becoming very clear to me, it’s like this new era where I feel we are living in now, and you see it a lot, it permeates culture right now worldwide such as a lot of standing up against things and standing up for what you believe in. Like there is the whole Occupy movement, the standard of living in all these different places in the world, you know you look at North Korea, Egypt, places in the Middle East like Iraq, and Africa, I mean the list goes on, all these worldwide issues have been going on for a while but it seems like now the media is blowing it up and people are starting to really take movement and take action. There is a lot of this prevailing backlash from the populist of a nation against their government or their system of organized law and this mentality is reaching more of a boiling point that I think I have ever seen within the short 23 years that I have been alive. So I feel like I am just catching these vibes a lot and that is kind of what I wrote the record about. And in my mind we are in this rebel era you know?, Or we are moving ever so closer to it,  people are  not accepting that this is how things are and how you should live. You should be educated and get your mind right and know what’s going on and if it doesn’t suit you, you know you have a voice and that it is okay to speak up.

You recently performed at Outside Lands this past weekend, how does the festival environment differ from your
own shows?

That’s a good question, so I feel like with festivals you get a larger demographic of kids, you know it’s not just people who know what they are getting themselves into for the most part, such as some couple that is there to see Phoenix or even Paul McCartney, could just walk by while I am playing and kind of hear it and think “oh cool why don’t we check that out? It is right here.” And I think that’s what’s so cool that you can just get whoever, and whoever is willing and you can just have people check it out and also the energy, that’s another thing too. The energy is so palpable, not to say that the shows we do are drab or dull or less energetic, I mean the festival energy it’s unique because you get the chance to perform music in such creative and unique places for a group of people who seem to live more open-minded and seem to be down for whatever. You know they just want to enjoy themselves, relax and it’s also in the summer so the weather is nice and it is just really cool. And also the whole show thing I think it is a little more concentrated, people know you a little bit more and it is more of like your own, instead of stepping into someone else’s world to play music, it’s kind of like they are stepping into your world for you to show them your music.