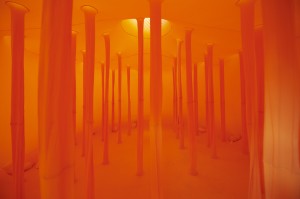 Since the beginning of September, a traveling art and music event called Station to Station has been traveling across the United States. The event was organized by artist Doug Aitken, in which an imagined train will travel to a total of nine stops, starting in New York and ending in the Bay Area. The ideology behind the event is to connect famous names and underground artists of food, music, literature, and film together at different train stations; and the train itself is considered a moving kinetic sculpture. The train’s most recent stop this past week was at Saint Paul Union Depot in Twin Cities, Minneapolis. Union Depot is a rail station that is in the heart of Twin Cities and connects all of the downtowns in Minneapolis and St. Paul. Many people attended the gallery to see musicians Patti Smith, BodyCartography Project, Eleanor Friedberger, No Age, White Mystery, as well as many others! All different types of art work were represented at the gallery including: moving images, printed matter, and nomadic sculptures featured with such artists like Liz Glynn, Thomas Demand, Francis Alӱs, Doug Aitken, and countless others! Station to Station’s next stops will be in Santa Fe, New Mexico and Winslow, La Posada.

Check out the highlights from St. Paul, MN