It was a busy night of all different ages, ranging from young to old at Slim’s in San Francisco on Wednesday September 18th. Many were eager and excited to see the Montreal band Stars perform, but before Stars made their appearance to the audience, local Bay Area Oakland band Trails and Ways performed their own kick ass show for the small rowdy venue. Each song the band performed as well as the overall vibe they presented, was that of a beachy indie rock vibe. When hearing them, one could not help but categorize them as the next Vampire Weekend. The most noticeable talents were that of lead guitarist Hannah Van Loon, who rocked amazing skills on the guitar with prominent guitar riffs and strumming perfection.

As well as the skills of bassist Emma Oppen, who balanced the bass without ever overpowering the rest of the band throughout the entire set. Overall Trails and Ways were engaging and in love with their fans and audience. Their passion for music and performance greatly showed through at the show. Each member shared the opportunity of singing as well as introducing each other’s songs. Overall the Oakland natives had a great performance and provided the energy of a fun and friendship based band. When Stars appeared, the Canadian band had an immediate captivating stage presence! They opened up their performance with a literal bang, an intense bang of a tamborine that is! Torquil Campbell had a blast beating the tambourine like a drum set and Amy Millan began the set by telling all of us in her sweet and light-hearted voice, how much the band loved and appreciated all of us for our support as fans. Throughout the show both Millan and Campbell vibed perfectly off one another with their singing skills as well as in their instrumentation. The band sang new and old material including favorites, “Your Ex-Lover Is Dead,” “Personal,” “Dead Hearts,” and countless others. Overall the band put on an engaging and lively show, and the Bay Area awaits their return! 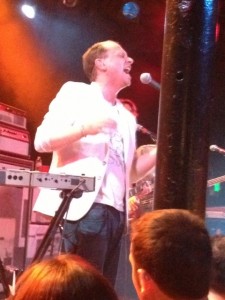