ON RADAR: The Features 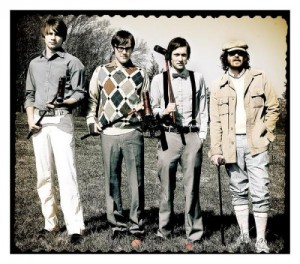 Originating back in 1994 the Tennessee indie rock band The Features began their musical journey in middle school. That was where Matt Pelham, Roger Dabbs, Don Sergio, and Parrish Yaw met each other and started the band. They created the band out of boredom and continued it through high school playing at local events, parties, and talent shows. After graduation the band went on to perform in bars and clubs near Nashville and Murfreesboro. Soon enough the band signed with local independent label, Spongebath Records and released their self-titled EP in 1997. The band then brought on member Jason Taylor to be their drummer. In 1998 they recorded a full length album but the album was never released except for songs “Thursday” and “Rabbit March,” which were later released on a limited 10″ vinyl record. Members Taylor and Yaw left the band and Taylor were replaced by Rollum Haas. In 1999-2000, they recorded a second full length album that also didn’t release, it was not until 2001 when the band released their EP called The Beginning. They began to tour a lot and were picked up by Universal Records. Universal Records re-released The Beginning in 2004 and soon released their debut album Exhibit A shortly after. The band gained much exposure especially when opening for Kings of Leon on tour. Mark Bond was later added to the band when things fizzled with Universal Records and the band no longer had a label to be represent them. In 2006 they self-released their EP known as The Contrast and LP Some Kind of Salvation in 2008. Today the band recently released their new album The Features  this past May, and the album features their latest hit “This Disorder.” The band and song sound like a mixture of Patrick Stump vocals, techno, and hard rock. The song is catchy and futuristic with a nice kick drum beat and heavy guitar strokes going on throughout its entirety. The meaning of the song is interpreted to be about someone having some kind of mental anxiety disorder in which the person wants to know why they keep thinking certain thoughts. We hear this with lyrics, “I’m having trouble standing still, and when I do my mind starts to reel…Is this the way I should feel?” The Features is currently available for streaming on iTunes and Spotify.

Check out the music video for “This Disorder” here!