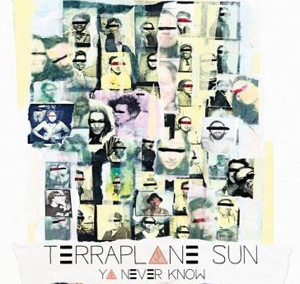 Originally from Venice, California is the indie blues rock band known as Terraplane Sun. The band consists of Ben Rothbard (Lead Vocals, Guitar, Harmonica), Cecil Campanaro (Bass, Vocals), John Zambetti (Lead Guitar, Mandolin, Vocals), Lyle Riddle (Drums), and Gabe Feenberg (Keyboard, Lap Steal Guitar, Accordian, Trombone).  The band came together back in 2010 and have recently recorded their new EP Ya Never Know with producer Dave Trumfio who has worked with Wilco and My Morning Jacket. The new EP features their song “Get Me Golden,” which depicts the bands’ sound, in which they themselves describe as “blues indie rock folk dance soul.” The song is upbeat and combines the different music genres into one. The song is about someone wanting to change their life’s direction such as their career path or just their life in general. We hear this in the lyrics, “I got a plan in the palm of my hand to get me rolling, that’s when I got a plan in the palm of my hand to get me golden.” It is a song that many young people can relate to, especially those who have recently graduated college and are struggling to figure out what they want to do in life or how to obtain a career in their field of study. The band has also opened up for big name acts like Imagine Dragons and Alabama Shakes. Fans of Grouplove and The Black Keys should check out Terraplane Sun. Ya Never Know is currently available for streaming on Spotify and iTunes.

Check out the music video for “Get Me Golden” here!