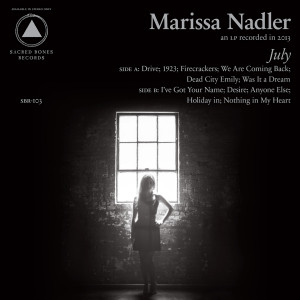 Originally from Boston, Massachusetts is singer/songwriter Marissa Nadler. She began her musical career back in 2000, and has released a total of 6 full-length albums including her recent album July, that released just this last month! Her music has a haunting ghostlike sound to it, with echoing backing vocals, acoustic guitar, and lost wandering lyrics. She began playing the guitar at a young age and sings about life experiences as well as references famous poets in her music, such as Edgar Allan Poe. Her featured track on her new album “Was It A Dream,” is a slow and eerie dream like song. With melodic background vocals, Nadler’s dark quiet voice, and electric guitar combined with string instruments that play throughout the song. The song lets the listener drift into a day dream state, in which they lose themselves in thoughts and imagination. Fans of Daughter and Regina Spektor should check out Marissa Nadler!

Check out the official music video for “Was It A Dream” here!