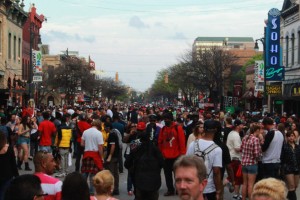 Saturday seemed to come impossibly fast, as SXSW comes to its ending weekend. Thousands of people roamed the streets looking for their favorite bands to see one last time before the return to normalcy hit them back into reality. While, some were bleary-eyed and almost thankful this week was almost over, many came with a renewed energy to end the week with a bang. Some even took it a little to far.

Hit rap artist Tyler the Creator was one of those ready to send SXSW off right but eventually got arrested for causing a riot. This came as not much of a surprise as police were roaming the streets everywhere, traveling in large groups, ready to stop any sort of trouble in its tracks. The shows however, still went on.

From on the streets, to larger venues acts played all throughout the night at every single venue. 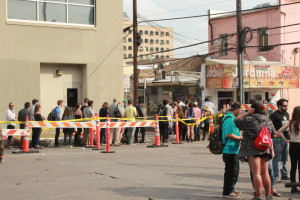 Lines began forming and wrapping around the buildings hours and hours before shows were set to start. One show that was highly anticipated was the American Authors show at Stubbs. The up and coming band was surely excited about playing such a large venue during the festival but unfortunately, after an hour’s delay due to sound trouble, they only got to play acoustically. While some were disappointed, the guys gave it all they had and still played an amazing show. 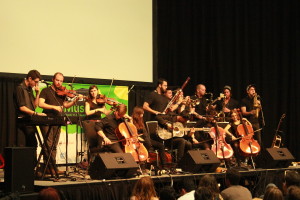 To end the shows in the Austin Convention Center for the day Mother Falcon played to the largest crowd I’ve seen at that stage yet. Giving a completely magical performance, they were definitely a great way to end the day.

And yes, there is still one more day today, Sunday, of closing parties and shows but for many Saturday was the last day. The recovery time for SXSW can be extensive and Monday looms upon us all too close. The lack of sleep and too much walking/partying is taking its toll.