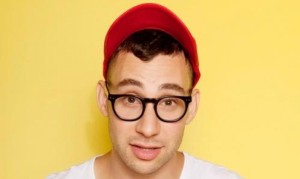 Lead guitarist from the hit pop band FUN, Jack Antonoff, released a single from his latest solo project, Bleachers. The single entitled “I Wanna Get Better” is an upbeat pop song filled with a rhythmic beat sure to be the next big summer hit. Did anyone even know he could sing?

As it turns out, yes. This isn’t the first time that Antonoff lead a band, he was also the lead singer for another group called Steel Train. The band made an apperance on an early incarnation of B-Sides (check it out below). Steel Train was highly successful, landing tours with Tegan & Sara, The Barenaked Ladies, The Fray, O.A.R., and many more talented artists but unfortunately in 2013 the band announced they had no plans for the future. While we’re sure Jack probably took that time off to focus on his other band FUN, some people just can’t stand sitting around when there could be work to be done. And so this ambitious musician decides to start his next project.

With Jack’s built-in recognition, Bleachers has gained critical acclaim from media all over, including the Huffington Post. The buzz has been going and rumors about a full album from the band this spring are giving fans of FUN and Jack Antonoff, hope. Bleachers has currently been on tour, including playing a show at SXSW, but what about FUN? From what we’ve heard it sounds like those guys are still going strong and have plans of new material in the making very soon.

So are you curious about Bleachers yet? Be sure to check out the song below and if you like what you hear you can buy it on itunes and amazon today.