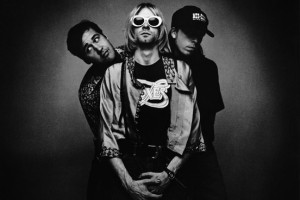 On April 10, 2014, the grunge gods, Nirvana, will be inducted by Michael Stipe of R.E.M. into the Rock and Roll Hall of Fame. Rumors are abound that Joan Jett may front the band with surviving members, Dave Grohl and Krist Novoselic at the ceremony, which will be televised on May 31. With only three three studio albums Kurt Cobain’s trio has undoubtedly left a lasting and meaningful impact on every facet of today’s music. Since his tragic suicide in 1994 musical artists from every different genre have done their best to pay respect to Cobain’s memory.

Along with KISS, Hall & Oates, Linda Rondstadt, Peter Gabriel and Yusef Islam (formerly Cat Stevens) Nirvana will be immortalized through induction. Here are some of the best covers ever done in the name of acknowledging this true artistic genius.

A funky interpretation, this track uses the latest musical technology to re-imagine the love song written for Courtney Love. This version became a Youtube sensation for its creativity, and it’s easy to see why.

Earlier this month Annie “St. Vincent” Clark covered the fifth track from Nevermind. On the anniversary of Cobain’s death she gave salute by playing this classic in Chicago. We have our fingers crossed for a studio version.

This independent nu-metal group led by Otep Shamaya made a faithful cover of Nevermind‘s fourth track. The song is best heard along side its nightmarishly cute music video directed by P.R. Brown.

7.) Jay Reatard – Frances Farmer Will Have Her Revenge On Seattle

Despite his controversial stage name Jimmy Lee Lindsey Jr. has left a legacy of his own with the alt-rock set since his substance related death in 2010. Among his dozens of studio and live albums Lindsey found time to record this cover that stays faithful to the original for the most part.

“Negative Creep” is perfect for a thrash metal band like Machine Head. The powerful vocals and guitar that drive this tune lose none of their impact in the homage.

A melancholic tribute to the alt-rock pioneers, this re-working of “Come As You Are” has a slow build that keeps the listener in a trance the whole way through. Civil Twilight gives us a new interpretation of the song that is substantial while still being engaging.

Civil Twilight - Come As You Are cover

While number 3 on this list has the crown of most divergent from the original, Horse Feathers’ “Drain You” is a close second. Any indie-folk cover of a grunge song is going to raise eyebrows, especially when it’s as good as the one below. Intimate and sweet, the themes of young love in the lyrics are plainly resonant in this low-key and bouncy cover.

Of all the songs on this list, Charles Bradley & The Menahan Street Band’s cover is the most different from the original. While the spirit of the song is altered in this soulful remake, it is still sufficiently emotional.

New York natives, Gaslight Anthem included this one as a bonus track on the deluxe version of their 2012 LP, Handwritten. The only problem with this version of “Sliver”is that it was never a single. While it’s not the best known song by Nirvana, Gaslight Anthem stayed true to it without doing a simple remake.

Amos’ 1992 EP Crucify had five tracks, and one of them was the greatest Nirvana cover ever produced. Her sultry, yet sad voice and emotive piano set a grim scene for this fitting tribute. No one else has ever captured the power and honesty of Cobain’s music in the same way she did, and it’s unlikely they ever will.