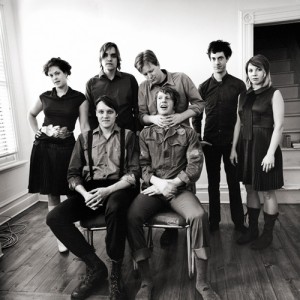 We all know the saying that less is more and of course that can be very true. However, sometimes more can be just as good, if not better. In the music world, this can very much be the case. We’ve rounded up five bands that prove to us that some songs just need an ensemble to do them justice and that is exactly what they are doing. From using the usual instruments to create a fuller sound to incorporating a few more unusual instruments to give the songs a twist, you don’t want to miss these,

While very new, PHOX is soon to be your favorite addiction. Not only is their music amazing, the true friendship and bond between the six members stands out. Each having different tastes in music, they all formed together to create some mixture between soul, rock, and psychedelia. If you thought it wasn’t hard to create something like that, think again. There’s a reason there are so many members.

With 8 members, The New Pornographers are a handful. They combine guitars, keys, and even an accordion, along with amazingly paired vocals to create an indie rock sound.

3. Edward Sharpe and the Magnetic Zeroes

A lot of people probably don’t know this but California based band Edward Sharpe and the Magnetic zeroes has 12 different band members. Almost all of them put in some sort of voice work along with their instrumental talents such as guitarm bass or drums, but the sheer amount of people in the band really give their songs a depth that only a large group of people can create.

Mother Falcon brings that full musical ensemble into a modern setting. With 22 members playing classical instruments from trumpets, bassoons, cellos and pianos, they have everything you love about classic big bands with a modern twist.

Probably one of the most well known of all on this list, Arcade Fire stand out for their beautifully well put together songs, mixing synths and beats into traditional instruments.