Stephen Colbert nearly broke the internet last week when it was announced he would be replacing David Letterman at the Late Show on CBS in 2015. While there has already been rampant speculation about the show few questions have actually been answered. Between now and the premier, there are likely to be exciting revelations. But what’s a good late night show without the back up band? With that in mind, here are a few ideas from your friends at B-Sides. 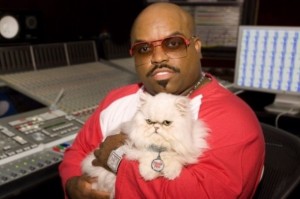 This one would be crazy. Cee lo was on Letterman in 2010 before appearing on The Report a few weeks later where he would change the lyrics of “F**k You” to “Fox News.” While his coaching on NBC’s The Voice has left something to be desired, he has incredible charm and charisma. His oddball, larger than life quality rivals Stephen’s and the dynamic between host and band leader would be beyond compelling.

In August of 2013 Daft Punk was supposed to perform their song “Get Lucky” on Colbert’s show. They cancelled in spectacular fashion and put the show in an uncomfortable position. Colbert invited Brian Cranston to do a dance routine to the song. The video of Cranston and Colbert went viral, and Daft Punk never managed to make it up to the show’s host. It would be pretty epic if the French duo decided to compensate for the snub  by adding their distinct techno sound to the show. They’d be the perfect strait-men for Colbert. After all, the robots never speak.

It would be unreasonable to expect Jack White

to take time out of his schedule to host a late night band. But any one of his Third Man label-mates would a most excellent hard rock supporting band. The Belles were introduced by White on Colbert in 2011 to perform a cover of the Colbert original “Charlene (I’m Right Behind You).” They also backed while Stephen sang vocals on the sequel song, “Charlene II ( I’m over you).” If they’re too busy contemplating infinite sadnesses, or touring any other Third Man group would be just as cool. Our advice? The Greenhornes, Willy Moon, or indie super group Divine Fits who’ve appeared on Letterman once already.

St. Vincent played  “Digital Witness” from her self-titled album on Colbert earlier this year. An admitted fan of the show, it would be fascinating to see this young artist take over for Paul Shaffer. Not to mention the added intreague in having a woman be a bandleader when most have been men. She’s an oddball and we would love to see how that aestetic could fit into a late night setting.

Shaffer hasn’t said yet if he plans on leaving the show. While it’s possible he will stay, it’s still unclear. Sure, at 64 he’s the second oldest person regularly appearing on any late night show (other than Letterman) but that doesn’t mean he’s finished with playing second banana to a host. The SNL native has ben doing this since the early seventies, and it may be hard for him to leave the music business just yet. Him staying may also make it an easier transition into having a new person starring on the Late Show.

Spektor was on Colbert in 2012 and she’s no stranger to late night TV. She’s been on Conan, Leno, and even the Letterman. She is very comfortable on stage and would be a fascinating sidekick for Colbert. Like St. Vincent, she’s a quirky woman, but her indie street-cred runs a mile long. The Soviet native has been making music since 2001 and her affection for Colbert’s comedy was obvious during their interviewwhen she visited The Report. The two have an obvious respect for one another, as can be seen in this video. Her light, pretty voice and innovative rock would be completely refreshing if played on a late night show.

Michael Stipe is a renowned jack-of-all-trades, and we can’t imagine him turning this role down if it was offered. Colbert accompanied the frontman with Brian Eno on his show in 2011. If the rest of the band agreed to back Stipe, they’d be second to none when it comes to late night bands. This would be a particularly amazing situation because the band has been broken up since 2011. A reunion on The Late Show would be gratifying for fans of R.E.M. and it would shatter viewer expectation of what a late night band is supposed to be. No matter who CBS chooses to support Colbert, we know it’s going to be awesome. Obviously they can be trusted to make good casting choices. After all, they’re the ones who hired Stephen in the first place.