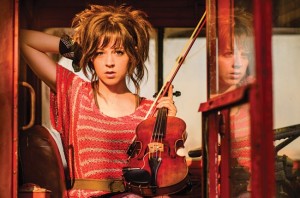 In this day and age bands are plentiful in a variety of genres; one genre that doesn’t get represented as much though is classical music. People in this day and age associate this timeless art as being old, outdated, and not really relevant. One young lady however is changing this mindset. Lindsey Stirling is one of the most talented violinists today but she’s not playing the usual Pierre Rode.

Lindsey Stirling is very famous for having covered many of today’s most popular songs including Party Rock Anthem by LMFAO, Grenade by Bruno Mars, and Radioactive by Imagine Dragons but she doesn’t just do covers. She has made a name for herself performing choreographed dance and violin numbers, creating rock and hip hop fusions with her classical instrument. At the age of five Lindsey grew an interest in playing this classical instrument and thus began private tutoring for 12 years, before joining a rock band in highschool. In 2010 she made her way to the quarter finals on America’s Got Talent and although she didn’t win, the show certainly helped spark her fame. After the show a cinematographer got in contact with the talented young star and inquired about shooting a music video for her. After placing this on youtube, Lindsey’s fame grew rapidly, helping her to release her very own EP and landing her all sorts of acclaim. She has won many youtube awards and in 2013 her self titled album became certified gold in Germany, and after selling 158,000 copies in the US she was named the second best selling classical artist right behind legend, Andrea Bocelli. Not too bad for a young woman of only 27.

Currently Lindsey is getting ready to release a brand new album entitled Shatter Me and is available for pre-order now on itunes and amazon. Be sure to check out her latest original single “Beyond the Veil” below.