Arcade Fire has been touring non-stop since the release of their new award-winning album, Reflektor. Since they started the U.S. leg of their tour, they have been covering a different artist each night of the tour. The thing that makes this unique, is that each artist they cover is from the state that they’re playing in that night. They have covered a wide range of artists, from Prince in Minneapolis, to Boyz II Men in Philly, and Chuck Berry in St. Louis:

Clearly the band has no issue tackling a variety of genres, and know their musical geography fairly well. There’s still a good amount of dates left in the U.S., and we decided that the only logical thing to do was make a wish list of the songs we hope to hear them cover. While we realize Win Butler and Co. may not be taking requests, it’s not impossible to think that they might consider them, if they were suggested the right one…

1. Justin Timberlake – “Summer Love” – Nashville, TN – May 1st
JT is one of the hottest artists alive right now. He owned twenty-thirteen, putting out two albums, and dominating the radio with their respective singles. While songs like “Mirrors” and “Suit & Tie” are some of JT’s most successful as an independent artist, his 2007 effort Futuresex/Lovesounds had some of his most imaginative songwriting to date. This subtly titled summer anthem is a piece of pulsing pop-perfection, and is guaranteed to put some swagger in the crowd.

2. The Mighty Mighty Bosstones – “The Impression That I Get” – Boston, MA – August 19th
This would be a no brainer for the band. They have a huge backing band full of horns, the song is an upbeat ska mega-hit that’s perfect for sing-a-longs, and the city’s right there in the band’s name. This one’s guaranteed to get Boston off their feet.

3. Kenny Loggins – “Footloose” – Seattle, WA -August 8th
Tell me this one wouldn’t have the entire audience losing their minds. I dare you. As soon as the drums and bass kick in on this song, the whole place will be shaking their hips and clapping their hands. Plus, it’s the twentieth year anniversary of the film about Kevin Bacon dancing his way into the heart of a town that had outlawed the act of doing so. Maybe he’d even make an appearance and re-enact this incredible appearance on The Tonight Show: 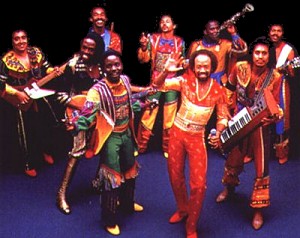 4. Earth, Wind & Fire – “September” – Chicago, IL – Aug 26-27th
Another peppy, horn filled classic, that the whole band can enjoy. While not everyone might know exactly what they’re saying in the chorus, they’ll be damned if they don’t make up their own words every time it rolls around. After the audience is a few drinks deep, they won’t care who hears the drunken gibberish they’re singing into their makeshift beer bottle microphones.

5. Beastie Boys – “Sabotage” – Brooklyn, NY – Aug 22-24
While “No Sleep Till Brooklyn” may have been the obvious choice, “Sabotage” is definitely the right one. Not only does this song absolutely kick-ass, but Arcade Fire has been wearing crazy costumes all tour. What better way to honor the song, than to dress up like the hip-hop trio did in their hilarious, epic music video for the song:

So what do you think? Would you wanna hear something different? Let us know in the comments section!

See when Arcade Fire’s coming close to you: http://arcadefire.com/live/