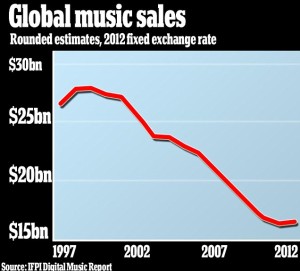 Even though I do still like to partake in the act of getting a physical copy of an album with the artwork, lyric booklet, etc. semi-frequently; I’m also downloading some new music as I type this. It’s just too convenient, and for the price of “on the house,” it’s pretty much impossible for a broke college grad to pass up. This is why the industry needs to adapt or die. So what can be done to preserve this sinking ship? Well, there’s actually a pretty good amount of options. Not without their faults, if these mediums get the attention they deserve from the proper channels, the music biz could be as lucrative as it ever was.

1. On-Site Advertising – While Megaupload was shut down by the FBI in 2012, it was a multimillion dollar company at the time of it’s seizure. How does a site like that make so much money? The same exact way any other site does; advertising is huge on sites like this due to their popularity. If business execs got on board with making their content free, they could start getting in line for the paychecks that would follow.

2. Pay What You Want – Making it free and advertising definitely works, but this idea has proved just as lucrative. Artists such as Nine Inch Nails and Radiohead have employed the “pay what you want” option, and still made plenty of money in the process. Hell, throw advertising in the mix and you have an online gold mine. It’s honestly surprising this hasn’t been more explored given the proven success.

3. Incentives- Though streaming sites like Spotify and Pandora use advertising to turn a buck as well, they also offer a monthly payment service that spares the listener ads in-between songs. This is huge for a lot of people who just can’t stand to be bothered with another Trojan ad. Free streaming might be the more sought after version now, but adding a few extra incentives such as; early access to new albums or concert tickets, exclusive content, and other cool features could really boost subscriptions.

There’s probably a bunch of other ways the industry could be progressing to stay relevant. Sites like Kickstarter, and programs like Garageband have certainly aided in cutting out the middle man that is the record labels, but they could get back in the ring if they just got creative. What do you think? Should the labels move on to greener pastures, or do they still have a shot? Do artists even need them anymore? Should the executives just go down with the ship? Let us know in the comments section!

Titanic | Death of the Captain Smith