Where Are They Now? Artists Featured in American Pie

Happy Birthday, Jason Biggs! The Orange Is The New Black star turned 36 yesterday, and while he may be longing for his imprisoned fiancé on Netflix nowadays, we all still remember him longing for foreign exchange students, and band geeks in American Pie. To help celebrate his birthday, us band geeks here at B-Sides decided to dig through the killer soundtracks to these films and see what ever happened to some of those bands.

American Hi-Fi – You probably know them from hits like “Flavor of the Week,” and “The Art of Losing,” but do you remember “Vertigo” from American Pie 2‘s soundtrack? Of course you… might! It wasn’t a big hit for the band, so it’s okay if you don’t. (We didn’t.) The band peaked in popularity with 2003’s “The Art of Losing,” but they still make music to this day. Most recently, they played a one off gig on May 7th, where they announced their soon to be released new album “Blood & Lemonade.” They have since put out a new single “Allison” available on iTunes.

Fenix TX – These Blink-182 apprentices may have earned the award for “Most Appropriately Picked Song for the American Pie Series Ever.” Their single “Phoebe Cates,” is a piece of pop-punk perfection, with a catchy song set to lyrics about enjoying the famous Fast Times at Ridgemont High pool scene in private. They split in 2002, and have reformed and changed members a few times since. While they have put out a live album, and a few new songs over the years, the band hasn’t put out a new album since before they broke up in 2002. They have planned to amend this in 2014, with a message on their Facebook page stating their new years resolution was to tour and put out a new record. In the time that they split, members of the band experimented with less successful side projects, “Denver Harbor,” and “Sing The Body Electric.”
Fenix TX - Phoebe Cates

Alien Ant Farm – Now I know you remember Alien Ant Farm vocalist Dryden Mitchell’s bizarre haircut. What was up with that? Anyways, these guys had a few original hits over the years, but none as big as their take on the King of Pop’s “Smooth Criminal.” That however, is not the song on the American Pie 2 soundtrack. That song is “Good (For A Woman)” which was not on any official AAF albums. These guys have also split numerous times and endured many line changes, but have ultimately reformed with all the original members. They have funded a new album “Always and Forever” through the crowd funding website PledgeMusic, expected out later this year.
LET EM KNOW 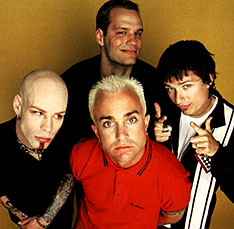 Goldfinger – It’s crazy to think Ska was so popular once upon a time. Goldfinger are kings of ska nostalgia, featuring such flashback jams as “Superman” in Tony Hawk’s Pro Skater, or the American Pie cut “Vintage Queen.” Twenty-fourteen is actually the twenty year anniversary of these ska-punk legends, and they’re still going strong. They’re mostly known for their music, but lead vocalist John Feldman is also a very outspoken proponent of animal rights, as well as a successful producer. He has produced tracks for artists such as The Used, Good Charlotte, Ashlee Simpson, and Hilary Duff(to name a few.) Fun Fact: Goldfinger holds the Guinness Book World Record for most live shows played in a year, with 385 shows in one year.

Bic Runga – This New Zealand singer-songwriter never got as popular as she deserved in America, but she’s huge in her homeland. Bic has worked steadily in the music industry since her American Pie days, releasing a total of four albums so far. She is one of the few artists to hold the prestigious honor of having more than one song featured in the American Pie saga. You probably remember her more popular song from the film, “Sway,” but she also has a duet with other “Where Are They Now” candidate Dan Wilson of Semisonic. (They wrote “Closing Time,” in case you didn’t know and were too lazy to Google it.) Bic most recently released a greatest hits album in 2012. She gave birth to her second child in 2013, which may attribute to the lack of new material in recent years.