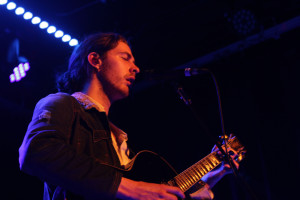 Hozier burst onto the music scene last year with his smash Youtube hit, “Take Me To Church.” The Irish born blues singer has been going non-stop since the spotlight hit him, playing the South By Southwest Festival before selling out every date on his first proper North American headlining tour. We spoke to the crooner about the tour, his new album, and more last Wednesday when he rolled into the Red Room at Cafe 939 in Boston.

First question, we’ve had a bit of a debate over at B-Sides on how exactly to pronounce your name?

Is that a traditional Irish name, or?

No, no. Byrne is, but Hozier is a French name. So it would’ve been Ho-zee-ay, but it’s Ho-zee-er for english speaking countries.

Cool, so this is your first North American tour?

Yea. Yup, first proper tour. We did a few showcases back in March, but this is the first tour yea.

Compared to the Irish music scene, did you have any expectations for American crowds?

It’s a shame I never get a chance to stay in one place for too long. South By Southwest was great, because you get a lot of music into one quick visit. With festivals and stuff, you always hope to check out certain bands and stuff, but the schedule is so crazy and hectic it can be a bit hard to. When I get the chance to though, it’s great, and I’m always anxious to see what local artists in different cities are up to.

How about fan reaction?

Fan reaction, certainly on this tour, we were playing New York and I was shocked. The response was just so warm and, just a really really nice reaction. I certainly wasn’t expecting anything like it. So it’s really weird. This was our first New York gig, and it was just really cool.

With two EP’s under your belt, I know you’re working on a full length album, coming out in September? Is that right?

So have you been working on songs while you’ve been touring?

Actually, I finished the album last week. I signed off on all the recordings like, a few days ago. So, it’s been a crazy couple weeks, but I was finishing it basically through April. So right now, I’m just listening to the first mixes. It’s all done, I’m just listening to mixes. And so I’ll be touring quite a bit between now and then.

You must be pretty excited.

Yea, I’m excited to get it out there. I just hope people like it.

Will there be songs on there from the EP as well?

Yea, there sure will. Take Me To Church was never released in the UK, so there will be some songs from the first EP. Maybe one or two from the second EP, then the rest is all new material.

Cool, speaking of Take Me To Church, that was the song that really helped you take off. Was writing that song a long process, or did it just come to you easily?

That one wasn’t too long, thankfully. I think that’s why I liked it more I think, or why I was more excited about it. You know, taking a long time to write a song, you can get tired of it by the time it’s finished. So, yea that one felt pretty short, probably came to me in the span of a month just jamming it out.

So you sold out every date of the American tour, how does that feel? Is it surreal?

Yea man, it’s crazy. It’s crazy. You know, when they were selling out I was busy in the studio, so I didn’t really get a minute to take it all in. So every time we play a gig, like last night in New York, and people are so nice and kind, and respond to the music, it’s shocking. It’s really a good feeling. It doesn’t become real to you until the gig.

Hozier - Take Me To Church