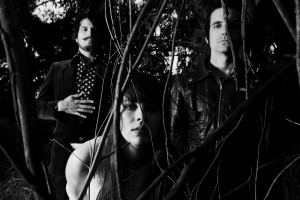 Originally from Mexico, is the hard rock female empowerment band known as Le Butcherettes! The band currently consists of 3 band members including, Teri “Gender Bender” Suarez (vocals, guitar, keyboard), Lia Braswell (drums), and Omar Rodriguez Lopez (bass, production). All of which moved to Los Angeles, CA when they couldn’t find success in their home country. In an interview with NPR radio, Suarez spoke about how in Mexican music culture men are predominant in the genre of rock. She also mentioned that the band’s departure from home is what their latest album Cry Is For The Flies centers on, especially the guilt of leaving.

The band overall has produced a total of two full length albums Sin, Sin, Sin (2011) and recently Cry Is For The Flies which released on May 15th, 2014. They have also released two EPs, Kill & Kill (2008) and iTunes Live: SXSW 2011. The new single “Demon Stuck In Your Eye,” is a song about escaping from past issues sung in an aggressive manner with hard rock instrumental. Suarez’s vocals can be compared to that of Karen O of the Yeah Yeah Yeahs! For those who enjoy listening to hard rock girl bands, be sure to check out Le Butcherettes and their new album Cry Is For The Flies!

Listen to “Demon Stuck In Your Eye” here!