Memorial Day weekend started off with a bang in Boston this weekend, as the Boston Calling Music Festival kicked off it’s third talent-stacked event in only a year’s time. The weather forecast threatened to literally rain on everyone’s parade, but mother nature was kind enough to spare everyone for most of the weekend. While people did get soaked during The Decemberists’ killer set, it didn’t slow the fans or the band down, and turned out to be the only performance that literally brought the thunder. (Okay, so there was no thunder, but it did rain a whole lot during their set, and their set alone.) 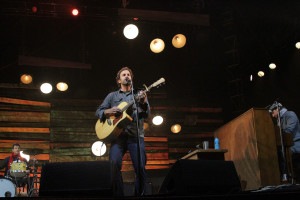 Friday was understandably the shortest of the three-day music binge, starting off with a solid, but tame set from Cass McCombs. Friday also boasted the smallest turnout, one that grew as McCombs and his band churned out their set of folky-rock bliss. They did a nice job warming up the crowd for what would turn out to be the liveliest set of the night. Edward Sharpe and the Magnetic Zeros came out in full force, as the boisterous band leader hopped all over the stage with the stamina of the Energizer Bunny. He then proceeded into the photo pit for a jig with some of the photographers, and ultimately ended up in the crowd himself, hopping the barricade to share the microphone with some incredibly lucky fans. The hysteria Sharpe and his Zeros instilled in the crowd was brought back down to earth nicely by the nights headliner Jack Johnson. Johnson boasted the most intricate stage decor of the whole weekend, with wooden planks and bright lightbulbs filling in the open space above and behind the band. The simple, but beautiful, stage set-up represented the mellow acoustic-crooners setlist nicely, as he gave the crowd a wonderful laid back performance. It was what the crowd would need to make it through the two long crazy days that would follow.

Saturday started at 1:00, giving concertgoers plenty of time to shake off their hangovers. The day started off much like the previous one, with the crowd slowly pouring in throughout the first few acts. Things didn’t really start to turn up until Walk Off The Earth took the stage, who managed to turn in an incredibly live performance, despite their early set time. Warpaint did an admirable job, but were tame by comparison, sandwiched between two exuberant sets from WOTE, and The Neighbourhood. The Neighbourhood frontman Jesse Rutherford turned in possibly the most confident performance from any of the bands all weekend, which is saying a lot considering the veterans they were surrounded by. Jenny Lewis played a fun set, but much like Warpaint was outdone by her surrounding acts, with the aforementioned Neighbourhood, and Frank Turner and the Sleeping Souls, who really brought the rock, dancing all over the stage through their entire set. The Head and the Heart helped set the pace for the rest of the night, with a set that matched the feel and excitement of the headliners for the evening. The Decemberists rocked through the rain, only letting it add to the experience of their set. They got the crowd good and ready, starving for the main event, and boy did Death Cab For Cutie deliver. Opening with the near nine minute “I Will Posses Your Heart,” before ripping through a set filled with hits and fan favorites alike. 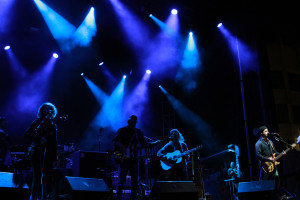 Sunday was bittersweet, as everyone tried to cling onto the fleeting long weekends hours for as long as they could. It started off the same as the other days, as lesser known bands such as The Districts turned in impressive performances to wandering crowds. The members of Built To Spill‘s age may be showing in their appearance, but certainly not in their sound, as they played a pitch perfect set. Tegan & Sara took the award for best crowd banter for the weekend as they comfortably breezed through their set. Bastille proved you don’t always need guitars to rock, as lead singer Dan Smith took cues from Edward Sharpe, making his way through the crowd during the bands explosive set. Brand New wowed the crowd, as Jesse Lacey screamed his vocal chords to shreds, the band ripped through some of their darker cuts, upping up the aggression on them tenfold. The band constantly broke into impromptu jam sessions mid song, letting the songs wander for a bit before reeling them back in to crashing finales. The biggest crushing finale, however, came with Modest Mouse‘s incendiary weekend closing set. The expansive band filled the stage, as no corner in the bands long discography was left unturned. The band surely earned their spot as weekend closers, and left the festival with a great sense of fulfillment.
Boston Calling proved it has what it takes to become a music festival staple this weekend, after what was considered a somewhat rocky start. The only complaint that could be made about this outing was that the sound was maybe not quite diverse enough, with the lineup being full of mostly indie-rock type acts. Promoters may have noticed this however, as the fall editions line-up boasts a much more diverse group of artists. Judging by this weekends experience, Boston Calling is where you’ll want to be this September without a doubt. Tickets are on sale now, so get ’em while you can! And check out the pictures B-Sides took all weekend here: https://www.flickr.com/photos/bsidestv/sets/