Justin Beiber hasn’t done much in the way of shedding his bad-boy image lately. The pop superstar has been making headlines the past year for making questionable decisions, such as vandalizing his neighbors home, and supposedly driving while under the influence. While it went from 0 to 60 pretty fast, it’s not that shocking when stars who have such huge success at such a young age act out in such a manner. Lindsay Lohan, Amanda Bynes, Corey Feldman, the list of troubled teen stars goes on, but things took a turn for the really ugly this past week when videos were released of Canada’s youngest(maybe only?) bad-boy singing racist lyrics to his own songs. This inexcusable behavior is sadly no stranger to the entertainment industry, as plenty of other artists have made questionably racist songs, comments, and the like. Here’s some of the more recent racial acts by the musically inclined.

Brad Paisley – While it’s hard to argue Brad Paisley is racist, it’s harder trying to understand how “Accidental Racist” got from conception all the way to production, with an LL Cool J feature to boot. The lyrics to the song are incredibly misguided, and do nothing in the way of helping either side’s core argument. While Paisley’s lyrics sound like an insensitive bigot, pleading the case for Confederate flags and excusing himself from his nations terrible past; Cool James is willing to concede, saying “Let bygones be bygones” while referring to uhh… Slavery? The initial thought behind the song may have been nice, but the finished product should’ve been a pretty big red flag, and I’m not talking about the one on Paisley’s Skynyrd shirt.

Macklemore – The news that Macklemore recently performed in a costume that has been labeled anti-Semitic was surprising, as the rapper had a huge hit with the pro-same-sex marriage song “Same Love.” Intolerance didn’t really seem like his bag, and while he’s claiming the costume was never intended to demean any particular group of people, some Jewish celebs, such as Seth Rogen, aren’t buying it. The laugh inducing, stoner comic exchanged some words with Macklemore on twitter regarding the incident. It didn’t really help the fact that a common negative Jewish stereotype is that they are overly-frugal, and Macklemore performed his ode to savings “Thrift Shop” while wearing the questionable costume. 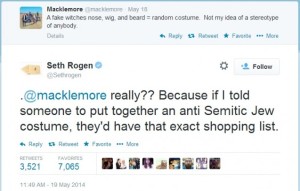 John Mayer – This is probably one of the weirdest of the group. John Mayer is no stranger to breaking women’s hearts, but he probably broke all his black fans, man or woman, hearts when he was interviewed by Playboy in 2010. Responding to the question “Do black women throw themselves at you?” with “I don’t think I open myself to it. My d*ck is sort of like a white supremacist. I’ve got a Benetton heart and a fu*kin’ David Duke c*ck. I’m going to start dating separately from my d*ck.” I can’t really imagine what the interviewers face looked like after that response, but apparently the old south isn’t the only southern region ever to deal with racism? Yikes.

Hank Williams Jr – Mr.Jr. has a pretty open opinion of our current POTUS, one that cost him the honor of having his voice ask America if they were ready for some football every Monday night. The remark that cost him the gig was a comparison of Obama to Hitler, which isn’t so much racist, as it is offensive. It was actually about a year later that Williams got a little more prejudice, announcing to a live crowd, “We’ve got a Muslim for a President who hates cowboys, hates cowgirls, hates fishing, hates farming, loves gays, and we hate him!” While I don’t think many can speak as to how the President feels about cowboys, cowgirls, fishing and farming, I’m not sure why being a Muslim and loving gay people is any cause for hate. Sounds like the only hate in that sentence is coming from Hank himself. I wonder why he didn’t win that run for Senator back in 2012…

Ted Nugent – The Nuge and Willy Jr. would probably make great friends, if they aren’t already. When the Motor City Madman isn’t hunting defenseless animals for fun, he also has a penchant for slamming the leader of the free world. He’s a little less subtle with his prejudice however, a quick Google search for “Ted Nugent Racist” will provide you with a list of examples longer than the bow he takes out hunting every night. The man has said some truly disgusting things, which earns him the title of Most Racist Musician on this list. I only wish he would take it as the insult it’s meant to be, if he were ever to stumble across this article.