Fútbol: Musicians and The World Cup

Soccer (or should I say Fútbol) has always been the biggest sport in the world. Aside from here in America, that is. It is starting to pick up in the States though, and with America on track to progress into Round 2 of the World Cup, we’re prepared to see it bigger than ever here. Plenty of famous musicians are huge soccer fans, here’s a list of some of our favorites.

Noel Gallagher– The Brit-pop God finds his own Oasis rooting for Manchester City during regular soccer seasons, so it’s no question who he’s rooting for in the World Cup. England has pretty much blown it this go around, but who knows, maybe next time if they win, Noel and his brother Liam will make-up and put the band back together. One can dream, right?

Shakira– Shakira may publicly root for Spain(her baby daddy’s on the team, as if she had a choice,) but everyone knows deep down in her heart, she’s rooting for her native Colombia. She represented the Cup with her 2010 World Cup anthem, “Waka Waka (This Time for Africa)“:

Pitbull– When Mr.Worldwide’s not counting to four at the beginning of his songs, he’s counting down the days till the World Cup. While it’s hard to tell if he’s rooting for the US or Brazil this year, one thing is clear; the man loves some fútbol. He even plays his drinking games with soccer balls: 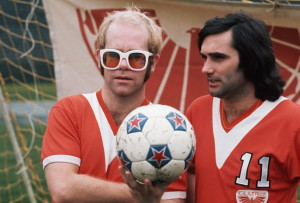 Sir Elton John – He became the chairman of Watford Football Club in 1976, and nowadays owns part of the Los Angeles Aztecs, as well as heavy stock still in Watford. It’s probably safe to assume Sir John is rooting for his British boys, but we like to think his investment in American soccer has him rooting for the USA too. Here’s a commercial for a European soccer channel that he’ll definitely never regret doing:

Q-Tip– The Queens born A Tribe Called Quest MC has made his love for soccer no secret. His twitter followers have been treated to eccentric live game updates since the World Cup started. Followers he’s not afraid to call out for being fair-weather fans. He’s corrected “posers” via twitter, proving Q isn’t hopping on the typical American bandwagon. It was hard to find video evidence of this, so just pretend this songs about a soccer ball: