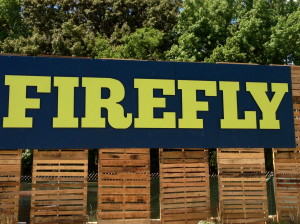 500,000 people went to Woodstock in 1969. That sounds horrific. Last weekend I went to Dover Delaware’s own Firefly Music Festival, there were fewer than 80 thousand and I felt like I was being punished for all of the freedom I’ve ever had in my life. Lack of elbow room aside, I believe that music festivals have something for everyone. There’s great bands, lots to do, delicious food, and interesting people. There is no one alive that could go to music festival and find themselves bored at any point during the festivities.

Day One: The Warm Up

There was a simpler time when musical festivals were only three days . This year Firefly decided to add a fourth day and I arrived dutifully the night before the first. I’m not sure why there was an extra evening worth of concerts but my guess is drugs. No offense to Local Natives (the Thursday headliner) but they’re not exactly on the same level as Foo Fighters, Outkast, and Jack Johnson (the other headliners). I think they were meant to be the soundtrack to twenty thousand college students experimenting with mushrooms. Again no offense, and we at B-sides do not in any way support the use of illegal drugs, but that doesn’t mean that people weren’t using them. After all, even music festival is a product of the success of Woodstock and the audience there was just as concerned with brown acid as they were with Jimi Hendrix’s national anthem. Looking back on it I think that Thursday made for a great opening act that lead into an awesome festival.

Day Two: Getting Down to Business

Friday was the real deal. Foo Figthers were headlining, and there was no more playing around. This also meant that the doors opened at noon instead of 5pm. I’d be lying if I said that the day wasn’t much more exhausting. This is the one thing that is too often overlooked. Yes it’s awesome, yes the festival is a great value for the amount of live music you get to see, and yes it’s an insane amount of fun. But it’s also very tiring. I bobbed my head along with Airborne Toxic Event while yawning. Took a 5-hour energy during Arctic Monkeys and still felt dead on my feet. And these are acts I legitimately love. Getting fewer than six hours of sleep in a tent is not the way I as meant to live and Firefly proved that. Even still it was a fantastic time and the Foo Fighters blew the roof on the joint, and their five song encore was incredible. They did a cover of  “School’s Out” that can be heard below.