The Foo Fighters recently announced they were releasing a new album in the fall of this year. Few modern rock bands can boast the success of this group. They have had five of their seven albums go platinum and the other two were certified gold. Needless to say, they’re pretty great. Before they grace our ears with new genius lit’s look back at their best work from yesteryear. 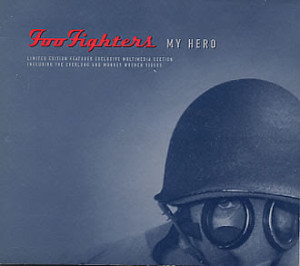 This song has been featured in countless high school graduation ceramonies as well as weightier occasions like 9/11 tributes and charity CDs for tsunami victims. “My Hero” is a sweet emotional rock ballad that stands out as one of the great sentimental songs of the genre in recent memory.

The misic video can only be described as gloriously 90’s. The goofy Mentos parody can be seen below.

8.) Aurora – There Is Nothing Left To Lose

“Aurora” is one of their more lyrical tunes. The heartfelt break-up song reminds us all of the first times we got our feelings seriously hurt. Its second verse opens with  “I just kinda died for you, you just kinda stared at me,” stabs at a special place in everyone. While not their best known tune, it’s one of their more serious songs.

The fourth track from their fourth album is about Grohl’s feelings about the band’s early 00’s hiatus. Check out the classic below

This is one of those songs that reminds everyone of someone. Whther it’s a parent, an old friend, or an ex we all have that “Best of You” person.  Just remember with friends, “I swear I’ll never give in, I refuse.” This song is the quintessential example of the Gospel according to Ghrol, and the lessons have the power to stick with us for life.

This song is the perfect hard rock crescendo. It builds from a whisper to a scream at a masterfully crafted pace. Don’t believe us, listen to it below.

One of their biggest hits, “Pretender” defines the band’s sound for a lot of fans. Side 1 track 1 is still played on alternative stations across the country and for good reason.

3.) Monkey Wrench – The Colour and The Shape

While this wasn’t their first single, “Monkey Wrench” introduced the Fighters to to the world as being more than a Nirvana Spin-Off. Put your laptop down, hit the play button, and dance along with the party below.

The newest entry on the list, “Rope” has a quite heavy metal feeling to it. The song is dimly hardcore while still giving the impression being sincerely melodramatic. It wasn’t the most popular single from Wasting Life but we here at B-Sides think it was tops among the others on the album.

1.) Everlong – The Colour and The Shape

There’s no question that “Everlong” is their best song. The question if it’s the best rock song of the previous decade. We’ve all heard this one a million times. The acoustic version is less well known and can be heard under these very words.