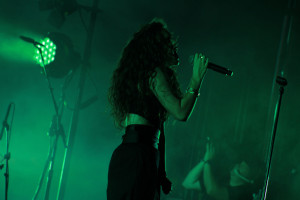 The 4th annual Boston Calling Festival came to a close last night, and even though things didn’t go as smoothly as possible, it was still one for the books. The festival seems to have found its rhythm, following a pacing similar to the spring edition of the festival B-Sides covered this past May.

Friday started the festival slow, much like last time, boasting the smallest attendance of the weekend. Future Islands did an admirable job warming up a crowd that was still filing in for most of their set. Neutral Milk Hotel was clearly in the company of friends, as they ripped through cuts from both their debut album, and their fan favorite masterpiece “In The Aeroplane Over The Sea.” The band was in full force, crunching out song after song with few breaks in between. 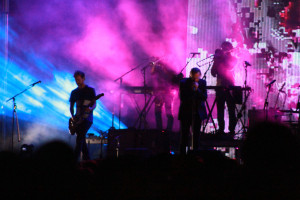 Singer Jeff Mangum claimed to be suffering from a bit of a chest infection, but even if it were apparent in his voice(which it wasn’t,) you’d never have known, as the crowd was singing along to at the top of their lungs. The night was closed out by The National, making their second Boston Calling appearance. The band played a perfect blend of mellow and upbeat tunes to keep the crowd pumped up, yet reserved enough to pace themselves for the weekend ahead.

Saturday was a bit of a disaster. Literally. In a funny enough coincidence, it rained on this Saturday, much like the spring festival’s Saturday. What wasn’t funny however, were the consequences. The day started off well enough, with a few solid performances from the days opening acts, which once again, played to a crowd that was mostly missing until about mid afternoon. Sky Ferreira was sounding pretty good, until a problem seemed to arise somewhere. It was unclear exactly what Sky was upset about, but she stopped two different songs two separate times, forcing her band to start over. The somewhat uncomfortable set was quickly forgotten however, as fun. guitarist Jack Antonoff’s new band, Bleachers got the crowd moving with their set of feel-good 80’s throwback-inspired songs. The band even threw in a great cover of “Dreams” by the Cranberries for good measure. The Hold Steady did a great job representing the rock n’ roll for the day, and prepped the crowd for what had promised to be a night full of incredible music. 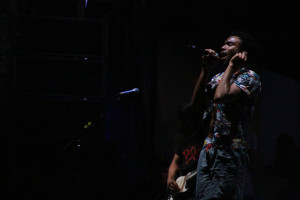 Unfortunately, Mother Nature had other plans, as the festival was postponed due to an incoming lightning storm. The storm cost about two hours of the night’s time, ultimately resulting in the cancellation of Volcano Choir, and Girl Talk’s sets. The rain put a damper on the mood of the evening, and was a bit mishandled by the event runners, who stopped selling alcohol for the rest of the evening until after the had storm passed. Things were looking pretty bleak, until the weather subsided abs Lorde came out, who brought her A game. The seventeen year old powerhouse continued her domination of the festival circuit, gyrating and hair whipping through an hour long set that featured her now familiar minimalist stage show. Lorde was a class act, and her stunning performance combined with her incredibly cordial and humble demeanor revived the crowd for Childish Gambino(aka Donald Glover’s) crazy, energetic, night closing set. The rapper never held still, jumping around from place to place, and song to song, he made sure everyone was leaving feeling more than okay with the days end result.

Sunday’s weather proved to be much more forgiving, and got off to about the same start as Saturday. People really started showing up around the time the War on Drugs came on stage. The War on Drugs were a nice breezy afternoon band, much like the following band Lake Street Dive. Spirits were high after the one-two punch of laid back rock and pop, but spirits soared once the indie-rock-rap-pop duo Twenty-One Pilots came out. The band relied a bit much on covers, and pre-recorded instrumentation but, the show more than made up for it. Singer Tyler Joseph crawled all over the place, including his piano, the crowd, and the drums, and the crowd was left screaming for more by the time they left the stage. The 1975 were the perfect follow-up, bringing things back down a notch with their cool, laid back blend of rock and pop. Vocalist Matt Healy made the ladies swoon with his British accent seeping through his melancholy harmonies, eventually pulling one up on stage, presumably making all her dreams come true.

Spoon was a nice follow-up, playing a career spanning set, their show was less interested in wowing the crowd with antics, and more focused on the music. The same could be said about The Replacements, who proved rock n’ roll doesn’t have an expiration date. The band was just as lively as their younger counterparts from the weekend, and played an absolutely incredible cover of the Jackson 5’s “I Want You Back.” The band set the bar high, but Nasty Nas and The Roots were up for the challenge. Nas came out solo at first, pulling heavily from his twenty-year old tour de force, “Illmatic,” before the Roots joined the stage. The two collaborated for a few tracks, before Nas left the stage for the Roots to take over, who reminded everyone that they’re much more than just a Late Night TV show band. Any member of the band that could run around, did run around, throughout the festival closing set. Questlove even took pictures with his iPhone in one hand, while still drumming in the other. 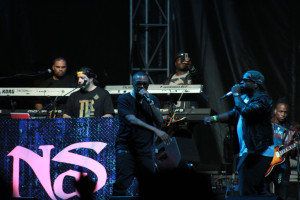 Rain delay and the ensuing chaos aside, Boston Calling has proven itself once again. The festival is quickly becoming the most frequently occurring in the states. The line-up was much more diverse this time, which was really the only downfall of the spring festival. At this rate, Boston Calling is a force to be reckoned with, so don’t be surprised if at some point in the future you hear it being mentioned on the same level as festivals like Coachella, and Lollapalooza.