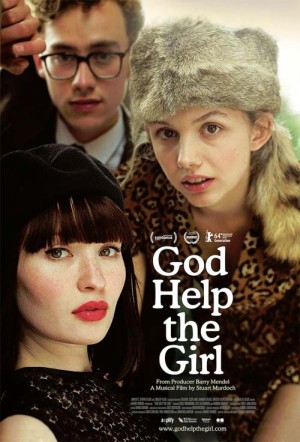 Call him what you want, Belle and Sebastian frontman Stuart Murdoch knows what he wants. You could say the man lives in a lovely and delightful bubble, but is that so wrong? Much of his mentality is projected onto God Help the Girl, his directorial debut, which he also wrote. The result is an unassuming musical film; boastfully twee amongst its bittersweet nature, and innocent at heart.

The story follows recovering anorexic Eve, desperate to turn her life around and seeking refuge in songwriting. Along her journey she befriends cynical music purist James and the bubbly and posh Cassie. The three then form a band that marries all the wonders of pop music; soon Eve finds herself in a dark place once again.

Through this project, Murdoch plants his own world into the narrative and conveys it through the eyes of Eve. All the jolly, morose, and nostalgic moments are accompanied by a charming set of tunes. The soundtrack mainly consists of the cast performing new versions of the previously recorded 2009 God Help the Girl songs, but also features some Belle and Sebastian songs. The thin plot does have its problematics, particularly the worrisome trivialization of Eve’s health and the fact that although film is set in Glasgow, none of the leads are really Scottish. The characters are rather flat, so the best way to enjoy the film is by letting the music tell the story.

On the surface, this film could be regarded as just a series of cutesy music videos paralleled by the occasional sad girl scene; but despite all of its embellishments, it is quite genuine. Altogether this is a pleasantly graceful story about a brief friendship lived through music. It effortlessly displays a very honest approach to dealing with difficult situations. Murdoch is aware that beauty is just one aspect of our world, yet he sees its expression as a rewarding way to embrace the darker facets of life, and builds a comforting home for them.

Check here for screenings of God Help the Girl near you.