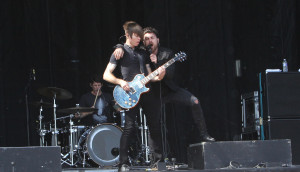 The third and final day of the first weekend installment of Austin City Limits 2014 brought the heat back to Zilker Park. Temperatures were warmest out of the three days of the festival With headliners Pearl Jam decidedly drawing an older crowd than Calvin Harris, the lineup was just as strong as the previous days. Eddie Vedder was in fine form, as the seminal grunge rock band ran through a nearly 30-song set starting with “Long Road” and ran through a mix of alternative rock radio staples “Corduroy”, “Evenflow” as well as their cover of the John Lennon track, “Imagine”, which they recently released. On the other side of the park, it felt like the festival was just getting started as Calvin Harris had an immense crowd of young and old alike dancing to the DJ’s EDM set. Neon glow sticks, glasses and assorted neon accessories waved along as the set included lots of radio staples.

The third day had a decidedly stronger punk rock presence out of all three days with bands like AFI, Gaslight Anthem, and the eagerly anticipated The Replacements performing. Veteran alternative hard rock band AFI performed an hour set including, “The Leaving Song Pt 2.” “Girls Not Grey”, and “Love Like Winter” that kept the crowd enthused right from the start. The Gaslight Anthem brought its rockabilly Springsteen-esque sounds to the festival from “The ’59 Sound” to “Even Cowgirls Get the Blues” to the rock sounds that showcased its more recent polished sound such as, “Get Hurt” from their current album. The Replacements were the talk of the daytime lineup for many and the veteran band didn’t disappoint. Schooling the younger crowd with “Tommy Gets His Tonsils Out” and “Bastards of Young” the punk legends symbolized hope that today’s current indie pop landscape can very well be balanced out with new and upcoming talent.

The day’s music had many standouts with M0 drawing a solid early crowd as the British songstress showed she has the potential to command a larger audience in the future. Phantogram continues to impress as the audience sang along to their familiar songs, the recent radio hits “Fall In Love” and “Black Out Days” as well as many tracks like “Mouthful of Diamonds” and “As Far as I Can See” from the band’s debut, “Eyelid Movies”. Chromeo held a solid crowd looking to dance on the final day as EDM DJ Zedd had a crowd just as strong dancing into the night.

Overall, the festival was an overwhelming success and its organizers are clearly making Austin City Limits a destination festival that rivals Coachella.

Check out the photos!